Aeromexico raised MRX3.9 billion (USD330 million) in an IPO, selling 109 million shares on 14-Apr-2011 and pricing them at MRX31 (USD2.6) each. The carrier is seeking to consolidate market leadership after its main competitor Mexicana filed for bankruptcy last year.

The stock fell 0.9% to 30.72 pesos at 16:00 New York time in Mexico City trading. Aeromexico CFO Ricardo Sanchez Baker stated the sale generated demand that was twice the offering. The company plans to use the money raised as part of its two-year, USD1.3 billion plan to boost its cash position to about 15% of revenue and buy more aircraft.

Also in Latin America, Copa Holdings mandated JP Morgan to provide Export-Import Bank of the United States guaranteed funding for five B737-800 aircraft scheduled to be delivered in 2011. The facility, totaling US178.5 million, includes 12-year financing terms at competitive rates and will finance all direct Boeing purchases scheduled for delivery to Copa Airlines in 2011.

US airline stocks were generally lower, with a 4.1% fall at Allegiant Air and 2.3%-2.4% falls at most major carriers. The sole exception was US cargo carrier Atlas Air, which was up 1.6%. Latin American stocks were stronger, with the exception of Copa Airlines, down 0.1%. 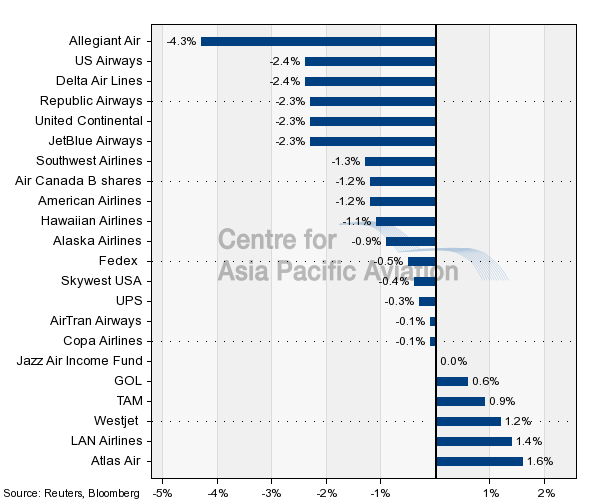