Aeroflot (+1.8%) was one of the day’s biggest gainers in a day of mixed trading for European airline shares on Monday (06-Dec-2010). The carrier rose to a two year high after reporting a 65% year-on-year improvement in net profit, to USD281 million, for the nine months ended 30-Sep-2010.

Turkish Airlines (-1.5%) continued to decline for the day after Turkey's Asset Sales Agency stated it would select an advisor on the possible sale of its 49.1% stake in Turkish Airlines. The adviser will determine strategy for the sale of an unspecified amount of the state’s holding in the carrier. Turkey aims to raise as much as USD6.4 billion from disposals of government holdings in 2011.

The fall was despite a 1.3% rise in Turkey’s ISE index. Turkish Airlines has risen only 4.6% so far this year, while the benchmark stock index has risen 27%. Finans Invest stated they expect pressure on Turkish Airlines’ shares in the short term following the announcement of the public offer plans. However, analysts at Tera stated a lack of details so far about the offer could lead to an overhang of stock. 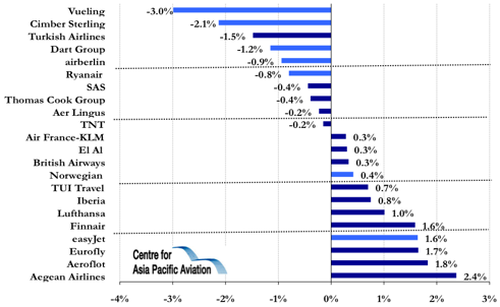