The carrier attributes the result to increased passenger traffic and the receipt of USD52 million from Boris Berezovsky following a ruling by a Swiss court.

airberlin (+6.3%) shares soared after announcing it has closed its EUR200 million bond offer, having been oversubscribed on the first day. On 01-Nov-2010, the carrier disclosed its intention to issue EUR150 million bonds between 02-Nov-2010 and 05-Nov-2010. The carrier also reserved an option for an additional EUR50 million in bonds.

Air France-KLM (+1.1%) also gained for the day, following news Alitalia CEO Rocco Sabelli reportedly intends to offer Alitalia as a merger partner for Air France-KLM beyond 2013. The CEO’s comments are to be published as part of a book written by an Italian journalist.

Alitalia Chairman, Roberto Colannino, dismissed any idea of a merger with the airline group, stating the plan was unlikely to receive shareholder support. Air France-KLM already has a 25% stake in Alitalia, taken as part of the restructuring of the carrier in 2008.

Ryanair (+1.0%) also rebounded, as Arbuthnot upgraded its share rating for the carrier from "buy" to "strong buy", also increasing its target price from EUR4.75 to EUR5. 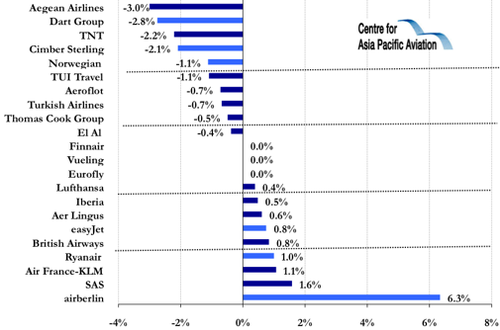