European airline shares finally gained on Friday (27-Aug-2010), as wider markets closed higher on rises in the telecoms and defence sectors. SVM Managing Director, Colin McLean, told Reuters that the gains were a “rally after a sell-off, with no conviction behind it”.

More positively, the carrier racked up a net profit of EUR31.1 million for 2Q010, compared with the loss of EUR72.8 million in the previous corresponding period.

The carrier stated the improvement was chiefly the result of a 2.8% rise in revenues to EUR2,226.7 million in the first half of the year. Earnings growth in 2Q2010 reached 10.2%.

According to Iberia, the recovery in income was due largely to stronger demand in international markets, and especially in business traffic, and heightened sales efforts. However, the domestic market remained “in the doldrums”, leading to negative results.

Aer Lingus expected to report operating profit for 2010 and 2011

Aer Lingus ended the day flat, despite analysts at Davy Stockbrokers stating that the carrier is on course to report an operating profit of EUR57 million for 2011, due to its cost cutting programme and a recovery in demand in continental Europe and the US. The group upgraded its forecasts, now expecting the carrier to report an operating profit of EUR21.2 million in 2010, up from its previous forecast of a loss of EUR4.8 million. Davy also reiterated its "outperform" rating for Aer Lingus, with a price target of EUR1.50. The carrier ended trading at EUR. 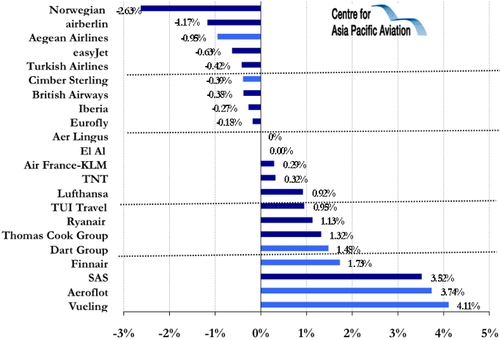