Shares in Aeroflot rose 2.1% yesterday, upon the release of the carrier’s financial report for the nine months ended 30-Sep-2009.

The carrier reported a 31.2% year-on-year drop in consolidated income to USD2.5 million. Operating profit fell just 8.8% year-on-year, on a 33.5% reduction in operating costs. In Nov-2009, Aeroflot increased its passenger numbers by 4% year-on-year and load factor jumped 1.8 ppts to 69.7%.

Aer Lingus’ shares surged 7.6% yesterday, in a strong day of trade on the Iseq, as stocks in Irish banks rebounded, including AIB and Bank of Ireland, up 18.7% and 11.0%, respectively. Shares in low cost rival, Ryanair, closed 1.2% higher yesterday.

Shares in Air France-KLM dipped 0.6%, as French air crash investigation bureau, BEA, released the findings of the International Working Group on Flight Data Recovery related to the crash of Air France flight AF 447 on 01-Jun-2009. French Accident Investigation Agency Chief, Jean-Paul Troadec, stated he is optimistic about finding the black boxes of the Air France flight, which crashed into the Atlantic in Jun-2009 en route from Rio to Paris. The third phase search commences in Feb-2010 and has been narrowed down to 2,500 sq km, a fifth of the size of previous search areas.

Elsewhere, shares in Lufthansa lost 0.7%, despite a 0.47% gain on the Frankfurt DAX. British Airways declined 2.0%. 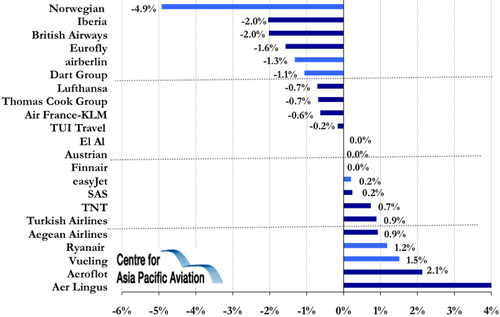