The majority of European airline shares rose on Friday (13-Aug-2010), as the wider market made a modest gain for the session. Markets were boosted by news the Euro zone economy grew at its fastest quarterly pace in 2Q2010.

The carrier stated unit revenue per ASK maintained a significant increase with respect to the previous year, despite the augment of 10.6% in the average stage length, in part boosted by the growth of business-class traffic in long and medium-haul routes.

Lufthansa (-0.6%) slipped slightly on news the German Government has revised its three-tier tax on air travel, increasing the proposed tax on long-haul services. The government now plans to impose a tax of EUR8 for short-haul flights, instead of EUR9 for European flights and services to Libya, Morocco and Tunisia. The government still plans to impose a EUR25 levy on medium-haul flights, but has increased the proposed tax on long-haul flights from EUR40 to EUR45. 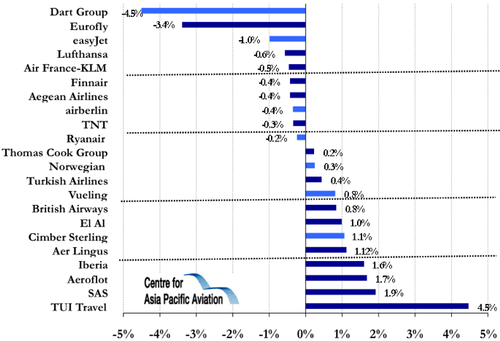