Aeroflot (+0.9%) gained after receiving approval from Russia’s Federal Antimonopoly Service to increase its shareholding in Saratov Airlines. Aeroflot now controls 51% of the airline, after the purchase of 26,000 shares from Rostekhnologii.

Finnair (+1.8%) was the day’s biggest gainer. The carrier announced plans to acquire two Airbus A340 aircraft from ILFC to meet increasing demand on Asian services. The aircraft will commence operation by early 2011 when its long-haul Airbus fleet will grow to 15. In Jun-2010, the carrier ordered five new A321ER aircraft valued at approximately USD480 million to be delivered after 2012. Earlier this week, Finnair also announced it has signed a codeshare deal with future oneworld partner Air Berlin (+0.3%) to cooperate on traffic within Europe and Asia from Nov-2010.

Lufthansa (-4.5%) suffered the biggest fall for the day. DZ Bank told Reuters the decline was the result of profit taking by investors following a recent surge in the carrier’s share price. Lufthansa’s shares had risen 12.3% in Jul-2010 until the release of its 2Q2010 results on 28-Jul-2010.

The carrier’s share price has been volatile for the past three months, before gaining some traction and rising over the past week. Lufthansa ended trading on 29-Jul-2010 at EUR12.22. 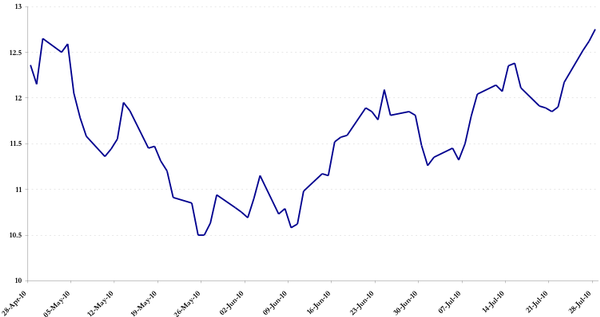 Lufthansa CFO, Stephan Gemkow, stated during trading that ticket prices began to rebound in 1H2010, with passenger demand rising faster than capacity growth, with the CFO adding that the company is “even more confident” that it will reach its target for a full-year operating profit that exceeds the EUR130 million reported in 2009. He added that the profit result should be “in line with current market expectations”, adding that revenue will increase from 2009, although no further details were provided. 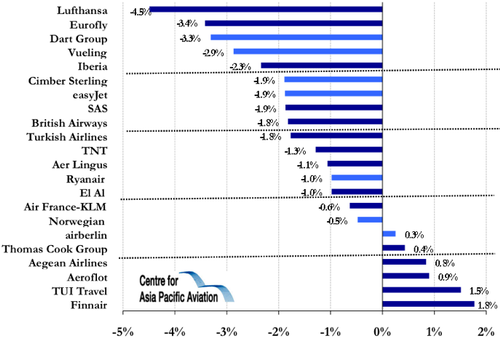