Aeroflot (+1.4% yesterday) is doing it tough in a country where economic growth is negative 9.5% so far this year.

Meanwhile, shares of LCC, Norwegian Air Shuttle (+6.6%), gained as it reported improved results yesterday, while travel operator, TUI, rebounded after slumping earlier in the week when a leading analyst lowered its rating to Neutral. 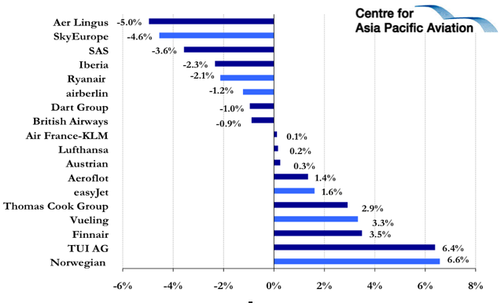 Norwegian reported improved 1Q09 earnings, carrying almost 108,000 passengers up on last year, improving turnover to NOK1.4, up 27% on last year. Although reporting a net loss of NOK110 million, this was “significantly better than last year”

Norwegian CEO, Bjorn Kjos, was more than satisfied with these results: “I am pleased with the first quarter results. Despite operating in an industry facing large economic challenges, we managed to significantly improve our first quarter results compared to last year. The Norwegian operation runs well, and we have restructured the organization in Sweden. We are also launching several new routes out of Denmark. These factors are expected to yield positive results in 2009,” he said.

In its adverse home climate, Russia’s largest airline, Aeroflot, has in fact performed reasonably well this year, after its shares plumbed the depths in Jan-2009. It might do well to refuse Russian millionaire, Alex Lebedev’s offer to sell failed German charter carrier/LCC, Blue Wings AG, to Aeroflot, despite the superficially low EUR1 price. Even in roubles that could cost a lot of money.

Blue Wings has been operating A320 services to Russia, Turkey and the Gulf, but lost its AOC on 1-Apr-09. Part owned by Russia’s National Reserve Company, Blue Wing has a Moscow based Russian sister, Red Wings. 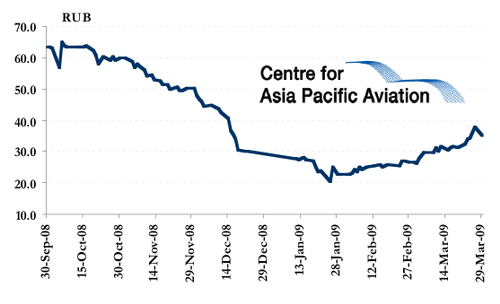