Aer Lingus (-0.5%) has warned cabin crew planning to take part in industrial action from 12-Oct-2010 that they face losing their jobs if they fail to carry out their "contractual duties". Represented by Impact, Aer Lingus cabin crew are planning to work to rule and will refuse to acknowledge new rosters being implemented by the airlines.

British Airways (+1.1%) and Unite have held talks at ACAS that both hope could lead to resolution of a long-running dispute between BA and its cabin crew. Unite has previously indicated that preparations for a new strike ballot are underway, however, Unite has put new peace proposals to BA and Secretary Tony Woodley is expected to discuss progress on talks with senior shop stewards this week.

Thomas Cook (+3.4%) and Co-operative Group announced they will merge their travel businesses to create the largest travel agency in the UK. The merger will bring together 1,204 stores and create a new joint subsidiary to be 70% owned by Thomas Cook and 30% held by the Co-operative. While both firms will retain their separate branding, Thomas Cook added that the merger may mean "hundreds" of job cuts. Savings are expected to among the GBP35 million p/a, which will be realised through job losses, store closures and the consolidation of store headquarters. After the merger, the company will have a combined 4.3 million customers. The deal is subject to regulatory approval.

Lufthansa (+2.5%) announced plans to reduce ticket surcharges for fuel and security costs on selected routes from 2011, due to the introduction of the new German national departure levy. Flights to/from and within Germany will attract a charge of EUR8-45 per passenger from 01-Jan-2011. 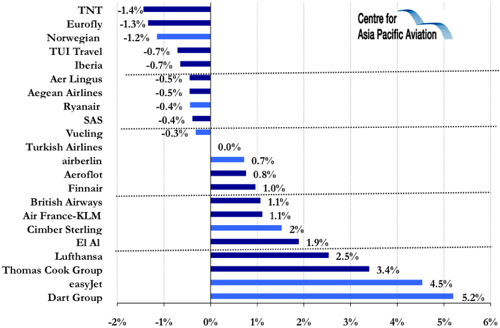