European airline shares were mostly down on Tuesday (09-Mar-2010), despite a slip in oil prices (-0.5%), to USD81.49. Wider markets ended trading flat. City Index head of equities, Giles Watts, told AFP the markets were lower as investors “moved to scale down positions that had been built up over the last four weeks of equity gains”.

Aer Lingus to go ahead with cost cutting plan

Aer Lingus (+3.4%) shares rose after the carrier announced it was going ahead with its EUR97 million p/a cost cutting plans. The carrier stated that, given the support of four out of five union groups, implementation of the 1,065 compulsory redundancies contemplated in the so called 'Plan B' is unfair. Therefore Aer Lingus intends to promptly proceed with the implementation of those elements of the cost reduction programme that were agreed with those four union groups. The plans will include 440 voluntary redundancies and a 10% pay cut.

The carrier is now developing a new solution for cabin crew staff, who voted against the proposals. The carrier stated the new proposal will incorporate redundancies, reduced salaries, new working conditions and the de-layering of the cabin crew organisation.

However, on a like-for-like basis (without AUA and bmi), capacity fell by 2.6% year-on-year. RPKs declined by 2.3%, meaning the load factor rose slightly (+0.3 pp). Lufthansa attributed the decline to its pilot strike, which hampered operations over four days late last month. Passenger load factor on short-haul routes fell by 1.7 ppts to 61.4%. In all long-haul regions, capacity reductions due to the strike and "more robust sales" resulted in a higher load factor. In the Americas the passenger load factor improved to 76.9% (+1.1 ppt).  Capacity adjustments were "more severe" on Asian routes (-7.9%), with the passenger load factor rising 2.4 ppts to 81.9%.

Conversely, Finnair (-0.3%) slipped after reporting a 4% decline in passenger numbers for Feb-2010, to 573,200. However, load factor rose 3.9 ppts, to 80.2%. Senior VP Communications, Christer Haglund, stated the “faint glimmer of a recovery is no more than that”, with fares remaining low, meaning the emerging growth is yet to provide a significant return. 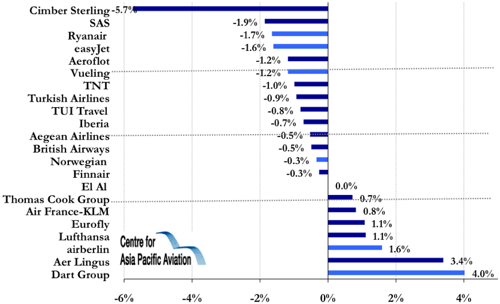