Shares in Aer Lingus were up 1.9% yesterday, as the carrier announced it would proceed with plans to cut EUR97 million in costs by the end of 2011 through its Transformation Plan programme, despite failing to reach an agreement with staff unions.

Aer Lingus CEO, Christoph Mueller, stated the failure to agree on terms is likely to lead to additional redundancies above the 676 voluntary redundancies outlined in the plan, and these redundancies may be compulsory. Mr Mueller added the carrier would not rule out further talks, as it had come close to agreements with all employee unions. The standout was the Irish Airline Pilots' Association. The pilots were reportedly seeking a 4% stake in the company in return for agreeing to the proposed plan.

The Irish carrier will also move to reduce capacity by eliminating loss-making routes, allowing withdrawal from operation of several aircraft.

Meanwhile, SIPTU stated it has made considerable progress with Aer Lingus management representatives concerning ground operations and head office/support, prior to the announcement.

Shares in Finnair dipped 0.3%, as the carrier was forced to cancel approximately 35 services, affecting approximately 4,000 passengers, due to a strike by ground handling staff. The carrier, on 30-Nov-2009, announced plans to outsource approximately 490 employees at its ground handling company, Northport, to the Barona Group for its baggage and apron services at Finland's Helsinki Vantaa Airport. In addition, 130 cargo terminal employees were to be transferred to the service of Suomen Transval Oy. 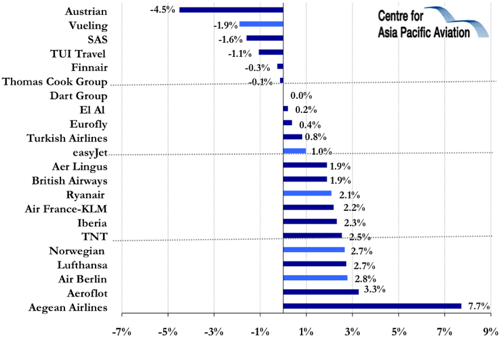