Shares in Aer Lingus surged 5.8% yesterday, as the Irish carrier’s Board of Directors reaffirmed the urgency in achieving EUR97 million in cost savings as outlined in its Transformation Plan, following a review of its progress.

Aer Lingus accepted an invitation from the National Implementation Body to conclude negotiations with employee representatives under the auspices of the Labour Relations Commission on 30-Nov-2009. At the conclusion of the talks, the Board and Management will meet to review the results, and in the event that the required EUR97 million savings have not been agreed in full, will proceed to implement an alternative means of delivering the savings within the timeframe set out under the plan.

Alternative means could include further reductions in capacity, which in turn would likely lead to additional redundancies. The carrier stated that while the preference will be for such redundancies to be on a voluntary basis, compulsory redundancies cannot be ruled out.

Elsewhere, shares in Lufthansa fell 2.9% yesterday. The German carrier received its 100th A320 Family aircraft from Airbus on 18-Nov-2009. 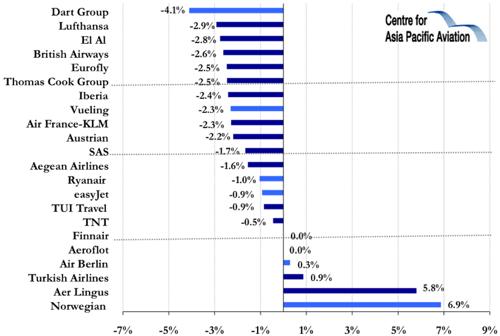