Aer Lingus states it will not agree to cabin crew demands; SAS up again; Ryanair and easyJet down

European carriers shares fell with wider markets on Tuesday (15-Mar-2010), despite a fall in oil prices (-1.8%), to USD79.80. Wider markets were down, continuing to suffer from the possibility of China tightening its monetary policy.

Investors were also concerned of new economic data to be released tomorrow, including US housing starts. The mining sector was the day’s biggest loser. In key markets, UK’s FTSE (-0.6%), France’s CAC (-0.9%) and Germany’s DAX (-0.7%) all closed the day lower.

Aer Lingus states it will not agree to cabin crew demands

Aer Lingus (+2.1) was the day’s biggest gainer. During trading, the carrier reiterated it would not agree to the Labour Relations Commission reconvening parties involved in the carrier's cabin crew dispute. Earlier this month, the airline's cabin crew rejected a EUR97 million cost reduction plan, with the carrier threatening to terminate the employment of all 1,200 cabin crew (although most would be rehired immediately after, on lower pay and conditions).

SAS (+1.1%) was also up after it extended maturities on credit facilities of USD707 million to 2013, conditional on a planned rights issue. The new rights issue has support from the three government owners and the largest private shareholder, the Knut and Alice Wallenberg Foundation through FAM, subject to certain conditions.

A consortium of banks has confirmed its expectation, subject to certain conditions, to enter into an underwriting agreement for the remaining 42.4% of the shares to be issued in the rights offering. The participation of the four principal owners in the rights issue is subject to conditions, including refinancing of approximately USD281 million of bonds that mature in 2010 and a final agreement on a further USD70.3 million in cost cutting measures with flight crew and cabin unions.

Both Ryanair (-1.9%) and easyJet (-1.9%) were down in trade yesterday. Ryanair claimed easyJet has removed its punctuality page from its website, following the completion of its new website, adding that easyJet has "failed to publish its punctuality for over 44 weeks since 26 April 2009". 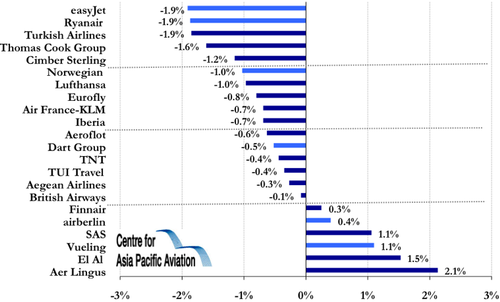