Aer Lingus shares on a roll, as O’Leary talks takeover

Since Aer Lingus reported a “positive start to the year” in its 1Q2010 results in Jun-2010, the Irish flag carrier’s shares have improved.

This did however involve an operating loss of EUR37.8 million, comparing favourably with a larger loss of EUR74.8 million in the previous corresponding period. At that time, CEO, Christoph Mueller, stated the carrier’s long-haul operations were still expected to make a loss in 2010, but said there was a "fairly good chance" long-haul operations will be profitable from 2011, or as soon as Ireland pulls out of recession.

The initial relief of a smaller loss under the recently appointed Mr Mueller barely explains the large improvement in Aer Lingus’ share price since then. The biggest leap, from EUR0.78 to EUR0.87, after rising a further 3.6% on Friday 16-Jul-2010, has in fact come since Ryanair CEO, Michael O’Leary last week suggested the flag carrier’s takeover by Ryanair was “ultimately inevitable”, in order to “rescue” it – and that Ryanair was the only one willing and able to do so.

Mr O’Leary’s statements came in a press conference where he addressed the EU’s General Court endorsed the Commission’s decision to block Ryanair’s takeover, at the same time ruling that Ryanair could hold on to its 29.8% stake.

"If the government were to accept an offer from Ryanair...we'd have no difficulty getting that through the European Commission," O'Leary told a press conference, adding that he would lower fares and increase jobs at the airline. 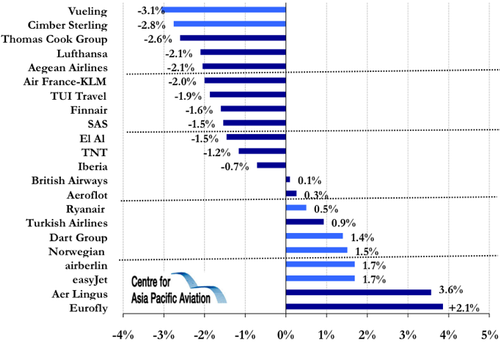