The majority of European carriers’ shares were up again on Thursday (13-May-2010) as wider markets made minor advances. Ongoing concerns over sovereign debt issues were offset by improved financial results from BT Group, 3i Group and Sainsbury.

Aer Lingus (+5.1%) gained after Goodbody chief economist, Dermot O’Leary, stated the day prior that the carrier’s shares have one of the biggest exposures to an improvement in the Irish economy. He added the shares currently have ‘Buy’ recommendations from analysts.

According to recent data, the Irish recession ended in 4Q2009 and sequential growth in the country’s economy resumed at the start of 2010 for the first time in two years.

SAS (+1.0%) continued its recent rise after the Estonian Government this week confirmed the carrier signed a letter of intent to sell its stake in Estonian Air. The details would remain confidential until the final shareholders agreement is concluded, it added, without giving a timeframe. The Estonian Government launched talks in Jan-2010 with SAS over Estonian Air's future and in Apr-2010 stated it hoped to complete the takeover in Jun/Jul-2010. SAS holds a 49% stake in Estonian Air. The government owns 34% and the remaining 17% belongs to Estonian investment company Cresco. 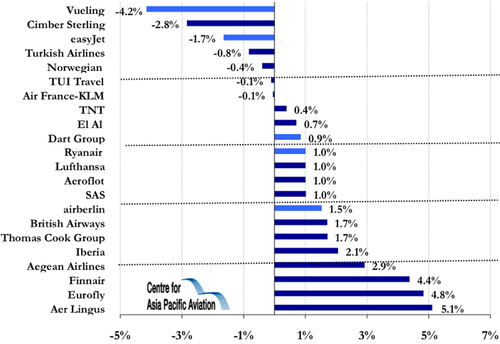