British Airways’ shares are expected to bounce back today (15-Feb-2010) as the carrier received provisional approval on Saturday night by US regulators for anti-trust immunity for a proposed trans-Atlantic alliance with American Airlines, with only minor slot losses at Heathrow.

Iberia’s shares closed 3.4% lower on Friday, before the carrier released its monthly traffic date showing a record January load factor of 80.0%, as passenger numbers rose 1.8% to 3.93 million and the airline cut capacity.

Meanwhile, Aegean Airlines rose 3.6% as it released a joint statement with Olympic Air that “discussions between the main shareholders of Olympic Air and Aegean Airlines have taken place concerning the potential of a future cooperation”, but adding, “at this time there is nothing specific to be announced. The statement followed local media reports that the airlines were discussing a future merger. 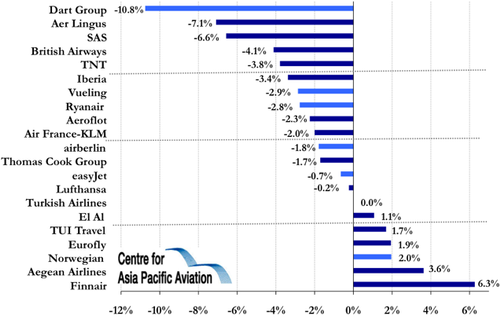