Aer Lingus is on track to deliver its first annual profit for three years, after reporting a creditable 35% increase in operating profits in the three months ended 30-Sep-2010 to EUR79.2 million, as yields across its slimmed-down network rose 12.5% year-on-year.

Revenue rose 5.5% to EUR411 million in the quarter, including a 4.9% increase in short-haul passenger revenue to EUR249.3 million, while long-haul revenues jumped 7.7% to EUR97.9 million. The airline is in talks with an Asian carrier for a network partnership in the region.

Staff costs were slashed by 19.6% to EUR61.9 million, but higher airport charges and depreciation led total expenditure up 0.3% to EUR332.5 million.

Overall it was a pleasing result for CEO, Christoph Mueller, who has been in the position for a little over one year. Mr Mueller however remains cautious on the outlook for 2011, “given concerns about the durability of the recent aviation sector performance as well as continuing economic uncertainty in our primary markets”. Aer Lingus’ shares tumbled 3.9% on Friday reflecting the caution, but ended the week virtually flat.

Earlier in the week, Mr Mueller stated the Irish Government would not sell its 25.4% strategic stake in Aer Lingus to Ryanair because it would “crush competition”. Mr Mueller added the government “will only sell to a party which guarantees the independence of Aer Lingus”. Britain's Office of Fair Trading launched an investigation in late Oct-2010 into Ryanair's stake in Aer Lingus, which Ryanair's CEO Michael O'Leary has labelled a “wild goose chase”. Ryanair’s shares fell 1.1% on Friday. 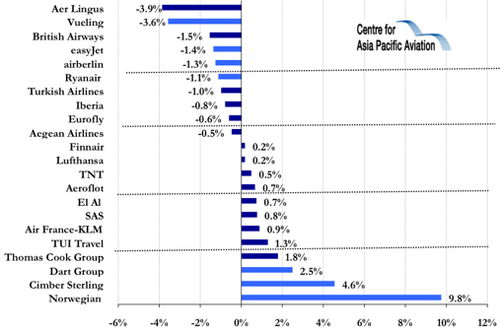