Shares in SAS were flat yesterday, following the release of its Nov-2009 traffic report. The Group reported an increase in load factor to 67.2% (+1.7 ppts year-on-year) and 6.4% year-on-year reduction in passenger numbers to 2.1 million for Nov-2009.

SAS expects the change in yield for Nov-2009 to be negative, with pressure on yields remaining, following 11.3% yield reduction in Oct-2009. The carrier stated market conditions remain “unpredictable” and timing of a recovery is uncertain.

Shares in Air France-KLM rose 0.5% yesterday. CEO, Pierre-Henri Gourgeon, stated the demand environment is still “horribly depressed”, but the airline noted a slight improvement in conditions. The CEO also noted that its trans-Atlantic JV with Delta has given “the same effect of consolidation” and the venture is working on the basis that eliminates distinctions between the carriers. Load factors have improved by 4 percentage points to 87-88%.

Austrian Airlines’ shares surged another 14.4% as the carrier’s extraordinary general meeting on 16-Dec-2009 nears. Lufthansa previously announced it intends to vote through a resolution to offer to acquire the shareholding of the existing minority shareholders at EUR0.50, excluding costs and provision at the meeting. Shares in Lufthansa were virtually flat yesterday (+0.1%). 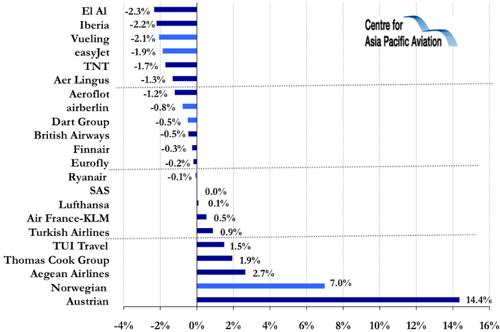