Shares in Aer Lingus gained 3.0% on Thursday, as the carrier confirmed plans to launch a comprehensive review of costs, upon the release of its dismal financial results for 1H2009.

Aer Lingus stated on Thursday that it plans to launch new cost cutting plan in the northern Autumn 2009 to conserve dwindling cash balances and boost overall efficiency. The carrier had a net cash balance of EUR439.6 million as at 30-Jun-09 - down by a third since the end of 2008. Cost cutting measures are to be implemented across both staff and non-staff areas.

Meanwhile, Aer Lingus CFO, Sean Coyle, stated he has “no idea” whether the carrier will reject a third bid by Ryanair to takeover the carrier. Aer Lingus added that it is currently having difficulty getting loans from banks to fund aircraft deliveries due to its losses. 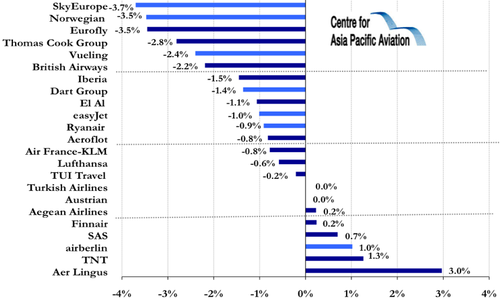