Aer Lingus expecting to return to profitability at start of 2011; Air France looking for aircraft

European airline shares again rose as wider markets soared on 27-May-2010, after China denied reports it was considering reducing its European government debt investments. The airlines’ gains occurred despite a 4.3% rise in oil prices (USD3), to USD74.55.

Aer Lingus expecting to return to profitability at start of 2011

Aer Lingus (+2.3%) announced the day prior that it expects to return to profitability by 1Q2011 or 2Q2011, but faces concerns the Irish economy’s decline will hamper the carrier’s return to profits. The carrier also stated it is interested in consolidation in the form of partnerships but is not in talks with specific carriers.

British Airways (+6.4%) was meanwhile one of the day’s biggest gainers. The carrier is expected to resume negotiations with cabin crew union, Unite, on 28-May-2010. The carrier has released a revised schedule for the next five-day block of strike action, with an increase in the number of flights to be operated over the period. BA plans to operate more than 70% of long-haul services from London Heathrow Airport (up from more than 60% this week) and more than 55% of short-haul flights (up from more than 50% this week).

Iberia (+6.8%) also witnessed a strong rise in share price for the day. Earlier this week, BA stated it expects to complete its merger with Iberia by year-end. 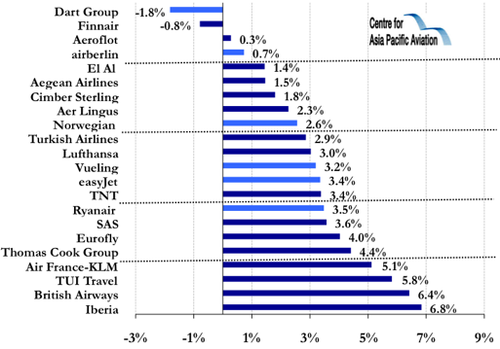