European shares plummeted on Tuesday (04-May-2010), with airlines sold-off. Markets were down on concerns the proposed EUR110 billion bailout package for Greece may not be effective and the crisis could spread to other European countries, such as Ireland, Italy, Portugal and Spain.

Aer Lingus (-4.3%) stated during trading that although the trading environment remains challenging, early indications on 2Q2010 revenues are positive. Short haul bookings for the quarter are broadly equivalent to the previous year, but are being achieved at higher yields. The Group’s long haul bookings are performing ahead of the prior year both in terms of load factor and yields.

However, the carrier stated its financial performance for 2Q2010 will be significantly impacted by recent airspace closures caused by the Icelandic volcanic eruption, with its initial estimate of the cash cost of approximately EUR20 million. However, the final cost will depend on the actual level of customer claims.

For 1H2010, Aer Lingus stated it has limited visibility of its booking profile for the period and its key markets remain subdued. The carrier added it remains cautious for the full year.

Lufthansa (-4.7%) announced its preliminary financial highlights for the three months ended 31-Mar-2010, reporting a net loss of EUR298 million, compared with a net loss of EUR267 million in the previous corresponding period. See related report: Lufthansa losses ugly. Is this a strategy in trouble? Board still upbeat on “positive demand trends”

British Airways requested to prove it will remain “sufficiently British”

British Airways (-5.3%) is being required to "prove itself sufficiently British" to remain in the FTSE 100 after its proposed merger with Iberia (-4.5%). The new holding company for British Airways and Iberia, to be named International Airlines, will be incorporated in Spain and will also have a listing in Madrid, which, according to FTSE regulations, makes the carrier a Spanish entity. However, the headquarters of International Airlines will be in the UK and the airline will retain British Airways as a brand and an operating company. In addition, the merged airline will be 56%-owned by existing BA shareholders.

Other stories featured in today’s issue of Europe Airline Daily: 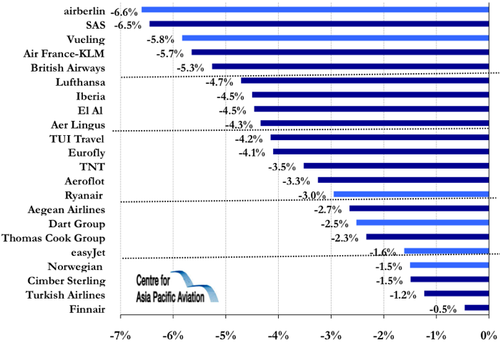