European carriers were mostly down with wider markets on Tuesday (30-Mar-2010), as investors became concerned that it will be difficult for European Union policymakers to bail out Greece from its sovereign debt issues, after the latest bond issue for EUR1 billion raised only EUR390 million.

Also during trading, data showed the UK GDP grew an upwardly revised 0.4% in 4Q2009, showing the economy exited recession in the last months of the year. However, UK’s FTSE (-0.7%) still ended trading down.

Aer Lingus (+4.2%) gained after confirming it has commenced the implementation of its EUR97 million cost-cutting plans, commenting that it has "started the process of improving yields while implementing the necessary cost reduction programme". The carrier stated it has "limited visibility at the moment over the second half of 2010", adding, "all our primary markets remain in recession, in particular the group's core Irish market". However, it reiterated that it would return to profit as soon as the Irish economy recovers.

SAS was also up, despite forecasting during trading a 1Q2009 loss of EUR102.6 million due to weak demand and negative effects from currency exchange rates. The carrier stated the projection is in line with internal forecasts and its USD1.4 billion cost-cutting programme aimed at making it profitable by 2011, is also on schedule. The airline also said the conditions from the four main owners to participate in the rights issue have been satisfied.

British Airways (-2.4%) was meanwhile the day’s biggest loser, as cabin crew held their final day of strike action. The carrier and union, Unite, are still yet to reach an agreement, with the Trades Union Congress stating both sides are no closer to resuming negotiations, despite both claiming to be open to talks. Unite has now threatened to launch further strike action, if BA does not present a suitable offer, which must include the return of travel concessions. The carrier removed the concessions from all staff who participated in the strike last week. 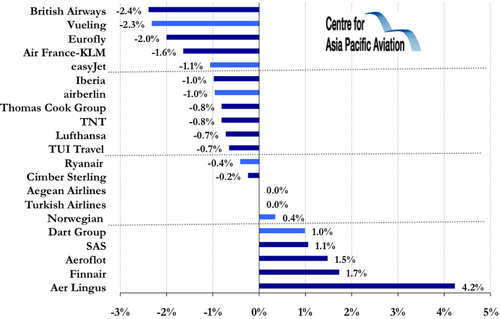