Aer Lingus CFO, Sean Coyle, announced his resignation from the airline “by mutual agreement” at the end of 2009.

Mr Coyle, a former Ryanair executive, joined the company in Aug-2008. He will also resign his position as a member of the Aer Lingus Board. Aer Lingus’ shares jumped 1.7% yesterday.

Meanwhile, Aer Lingus CEO, Christoph Mueller, cautioned that the carrier risks being taken over by Ryanair if it is unable to reduce costs and successfully negotiate with its unions. The carrier added that savings offered by the Irish Air Line Pilots' Association (IALPA) fell “significantly below” what is required. IALPA confirmed that Aer Lingus rejected a cost reduction package proposed by the pilots which would have amounted to EUR33 million p/a, through a combination of pay reductions and freezes and a 12-15% reduction in pilot numbers.

Aer Lingus has advised the Irish Enterprise, Trade and Employment Minister that it would seek 1,065 compulsory redundancies if it fails to reach agreement on its EUR97 million cost-cutting plan with its trade unions.

The Lufthansa Group saw a 24.3% increase in passenger traffic in Nov-2009, with its traffic report now including Austrian Airlines and British Midland. The Group’s load factor was down 0.9 ppts to year-on-year to 75.1%.

Lufthansa Passenger Airlines and SWISS both increased their passenger traffic by 1.2% and 3.4% year-on-year, respectively. Lufthansa reported a load factor reduction (-0.9 ppts to 75.1%), while SWISS reported an improvement (+3.0 ppts to 80.4%).

Austrian Airlines reports passenger numbers declined 2.2% year-on-year to 741,200 in Nov-1009, while load factor remained virtually flat (+0.2 ppts) to 72.4%. Members of the Executive Board, Andreas Bierwirth and Peter Malanik, reported the “downward trend in passenger volume is slowly levelling out", adding "the economic framework conditions remain extremely difficult, however, because yields are still coming under strong pressure”. 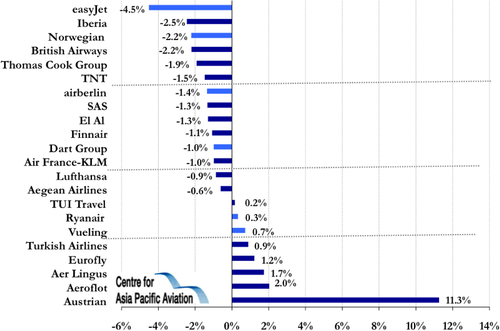