European carriers’ shares rebounded on Thursday (29-Apr-2010), moving with wider markets. Markets were up on expectations the European Union and the International Monetary Fund (IMF) are close to finalising bailout negotiations with Greece.

Aer Lingus (+4.4%) shares gained the most. The carrier appointed Trevor Jensen as COO, effective 01-Jun-2010, replacing Chief Engineer, Fergus Wilson, who has held the position of temporary COO since the departure of Niall Walsh earlier in 2010. Mr Jensen recently served as Programme Director for the Flight Safety Foundation and spent 25 years at Qantas. He also held the position of COO at Air New Zealand/Ansett and Jetstar.

Lufthansa (+3.6%) shares were also up after CEO, Wolfgang Mayrhuber, stated cargo and passenger demand is returning and the carrier is aiming to increase its group operating profit above the EUR130 million it reported in 2009. It also aims for a profit for its cargo division. The carrier expects to be able to resume paying full-year dividends, given the cost savings it has implemented in 2010. Lufthansa did not pay a dividend in 2009 after the carrier reported an EUR148 million loss.

The carrier also estimated it lost approximately EUR200 million in revenue due to the volcanic ash crisis. Mr Mayrhuber stated the EU should fairly compensate European carriers but the carrier was not requesting subsidies.

El Al (+0.4%) rose only marginally after CEO, Eliezer Shkedi, stated the carrier plans to cancel its order with Boeing for four B777-200s, stating, "since the agreement with Boeing was signed in 2008 and the global crisis occurred in world markets, there have been substantial changes in the aviation sector". The carrier added that its advance payment for the aircraft would be credited toward future purchases of aircraft. The carrier operates an all Boeing-fleet, comprised of 28 owned aircraft and ten leased aircraft. 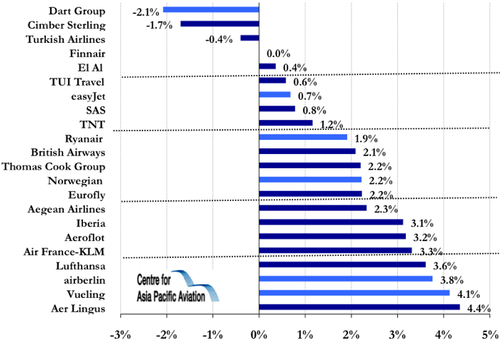