Shares in Aer Lingus dipped 0.7%, as the carrier released its traffic results for Sep-2009 and announced its highly-anticipated plans for restructuring staff costs, described earlier by incoming CEO, Christoph Mueller, as “amputation, not cosmetic cuts”.

Aer Lingus plans to reduce operating costs by EUR97 million by 2011 and proposes reducing employee numbers by up to 17% from 4,000 and cut salaries of remaining staff. Aer Lingus plans to offer voluntary redundancy to 489 operational and support staff to produce EUR74 million in savings by 2011. Employees on wages of EUR35,000 p/a and above can expect a pay cut, ahead of a second phase of redundancies of up to 187 staff. The carrier also plans to produce EUR23 million in non-staff cost savings during 2010. Aer Lingus previously stated it aims to complete the plan by 18-Nov-2009.

Mr Mueller, told Reuters the “outlook in each of our current core markets is poor and, in line with the macroeconomic outlook, we do not expect any near-term recovery. Against this backdrop, Aer Lingus cannot continue with an operating cost base which is structurally uncompetitive”.

Meanwhile, British Airways has been warned against its proposal to cut 1,700 jobs and implement a pay freeze, or a strike may be held in the lead up to Christmas by cabin crew union members of Unite. According to the union, the job cuts and pay freeze involve "significant contractual changes" for remaining staff. BA responded, stating all job cuts are voluntary and the changes would not alter the contract’s terms and conditions for existing staff.

Air France-KLM reported its ninth consecutive monthly decline in traffic for Sep-2009, as passenger numbers decreased 5.3% year-on-year for the month. However, load factor improved 1.0 ppts in Sep-2009 to 81.9%, as traffic (RPKs) dipped 3.7% year-on-year on a 4.9% capacity (ASKs) reduction.

Air France-KLM stated, “market conditions are similar to those prevailing before the Summer and unit revenues remain under pressure”. Shares in Air France-KLM were down 1.8% yesterday.

SAS yields in line with guidance

Elsewhere, shares in SAS jumped 3.3% yesterday, as the Group’s yields remained in line with guidance for Sep-2009, dropping 8.8% in the month. See separate report on SAS Group’s traffic and yields for Sep-2009 – ‘Balance of power in Scandinavia shifting, as Norwegian continues expansionist path’. 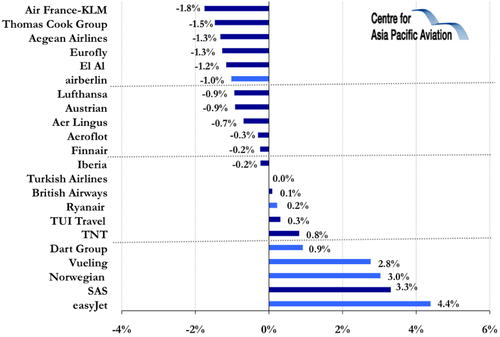