Aegean Airlines (+0.3%) made a slight gain in a day of mixed trading for European airlines on Monday (22-Nov-2010), despite reporting a net loss for the first nine months of 2010. The carrier reported a net loss of EUR8.4 million for the period, compared with a profit of EUR37.7 million in the previous corresponding period. The result was on the back of a 3% year-on-year decline in revenue to EUR466.2 million.

Managing Director Dimitris Gerogiannis attributed the losses to the “severe recession of the Greek economy”. Results were burdened by a EUR6.6 million charge imposed by the Greek Government on big business and “weak domestic consumption conditions”.

Mr Gerogiannis added Aegean’s investment in strengthening its international route network assisted its 3Q2010 results and efforts to improve costs and productivity and investment in new systems “have helped to mitigate the severe consequences of the Greek economic crisis”.

The carrier expects 4Q2010, traditionally a weak quarter for the carrier, to be loss making, meaning the carrier will report losses for FY2010. However, Mr Gerogiannis stated Aegean remains confident if its strategies.

easyJet (+1.3%) rose after Investec initiated coverage of the LCC with a "buy" rating and a target price of GBP 592 pence. The carrier ended trading at GBP 445.30 pence.

British Airways (-1.7%) meanwhile declined despite Investec also initiating coverage of the carrier with a "buy" rating and a target price of GBP 329 pence. BA ended trading at GBP 265.70 pence.

Dart Group (+0.9%) also gained for the day after Investors Chronicle analyst Nigel Bolitho stated the company share price has been steadily rising since its low of GBP 12.50 pence in early 2008 and the shares are expected to continue to rise. Mr Bolitho said Jet2.com was the main driver of the group’s 50% year-on-year improvement in net profit, due rising passenger numbers, an increase in long-haul flights and an increase in revenue per passenger. 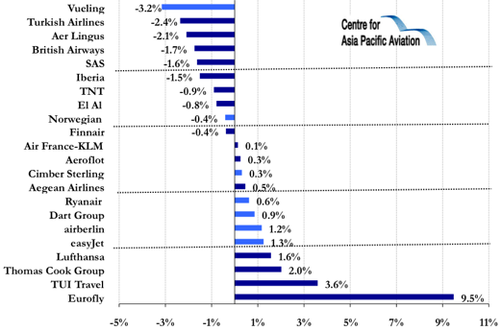