Aegean Airlines (-1.9%) was among the biggest falls in another day of mixed trading for European airline shares on Tuesday (14-Dec-2010). The carrier fell after cancelling all flights for 15-Dec-2010, due to a planned 24-hour strike by Greek civil aviation staff and air traffic controllers, as part of a general strike.

The result was on a 29% year-on-year improvement in revenue for the quarter to EUR73.4 million. Operating costs were up 26% for the period to EUR46.3 million.

Despite the improved 2Q2010-11 results, Cimber reiterated its previous forecast of an EBIT loss of DKK20-80 million (EUR2.7-) before special items

Lufthansa (+1.7%) and Air France-KLM (+1.4%) were among the biggest gainers for the session after upgrades of their shares from Credit Suisse Group AG. Both were upgraded from "neutral" to "outperform". 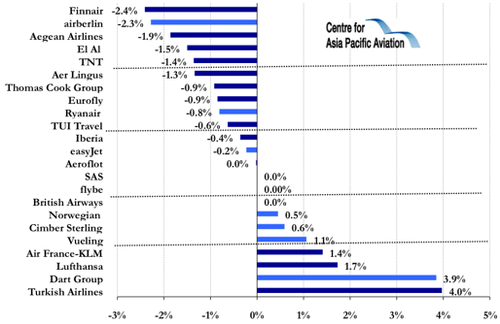