Shares in France’s Aéroports de Paris (AdP) led the way yesterday, rising 5.5% as it signed the new Economic Regulation Agreement with the French Government for the 2011-2015 period. AdP expects passenger traffic to rise 3.2% over the next five years.

The agreement follows on from the one signed in early 2006 and covers the major proposals put forward by Aéroports de Paris on 19-Feb-2010 in the public consultation document. The points of the new agreement are:

AdP has no plans to recruit new staff in the 2011-15 period. However, the company sees no further jobs cuts following last year’s 3.9% year-on-year reduction in staff numbers.

In Mexico, AdP owns a 25.5% stake in Grupo Centro Norte through OMA. Shares in OMA closed 2.9% higher yesterday. See CAPA profile page on OMA on its interests in 13 airports.

Other airport operator and investor stocks did well yesterday, including Hochtief (+4.0%) and Fraport (+3.5%), while Aeroporto di Firenze and Zurich added over 2% and Abertis, Aeroporto di Venezia and Vienna gained over 1%. 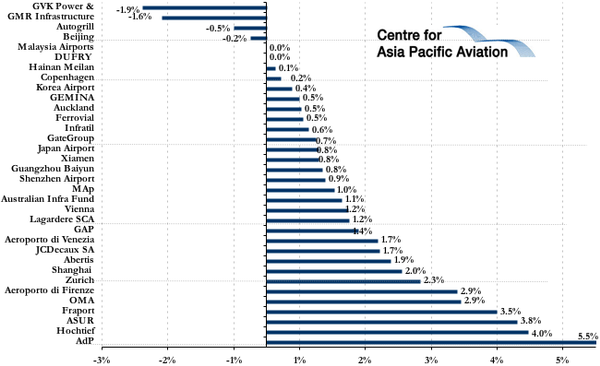