Shares in Virgin Blue gained 1.2% yesterday and are up by 3.4% in early-morning trading following the interim approval on 23-Sep-2010 from the Australian Competition and Consumer Commission of a proposed alliance between Virgin Blue and Etihad.

Under the alliance, Virgin Blue and Etihad have agreed to cooperate on joint pricing and scheduling of services across their networks, with the alliance to also add capacity between Australia and Abu Dhabi. Interim authorisation will allow the applicants to commence preparations for the alliance and to promote it to travellers ahead of the ACCC's final decision.

Mr Fyfe commented that the rejection will prevent the carriers from participating in the worldwide airline industry trend of consolidation and would result in reduced choice and higher fares for passengers. Air New Zealand stated it has reduced its trans-Tasman capacity by 15% over the past two years and the routes have not been profitable on average over the past decade. Mr Fyfe warned that further capacity cuts could be made if the deal is not approved. Shares in Air New Zealand were unchanged yesterday.

Also in the Asia Pacific market, Qantas CEO Alan Joyce reaffirmed the group has no plans to pursue a tie-up with British Airways after BA CEO Willie Walsh stated the carrier is still interested in doing a deal with Qantas.

However, Mr Joyce admitted the carrier is in talks with potential partners for Jetstar to expand international operations, including governments and “private parties”. Mr Joyce stated Jetstar will be a bigger airline than Virgin Blue in the next five years and is already more profitable. The LCC is growing at a rate of 20-30% p/a, with growth over the next five years to be fuelled by organic growth in Australia, New Zealand, Singapore and Vietnam, and from new ventures. Mr Joyce declined to specify which markets the carrier was looking to expand in, but it has previously stated China and India are crucial growth markets. 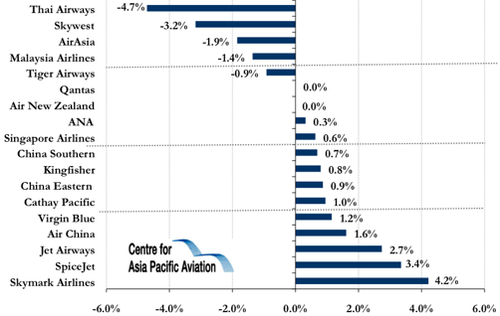 Source: Centre for Asia Pacific Aviation, Reuters & Financial Times
*It was a public holiday in Shanghai, South Korea and Taiwan on 22-Sep-2010