Skymark shares soared 19.7% in Tokyo, after the airline announced it will use cash to purchase A380s. The shares gained JPY150 yesterday – the daily limit - to close at JPY910, paring back some of the sharp losses made on 09-Nov when the stock fell by the daily limit following the initial A380 order.

Investors and analysts last week expressed grave concerns about how the LCC would fund the A380 order, which weighed heavily on Skymark shares. The share price recovered some of those losses yesterday as investors welcomed news that Skymark would finance its A380s through profits and leasing, rather than heading to the equity markets. According to reports, President Shinichi Nishikubo told media in Tokyo thatSkymark will fit the A380 with just 394 seats in a two-class configuration – the least-dense configuration announced for the A380 by far.

easyJet gains ahead of 3Q financials

easyJet (+1.3%) gained ahead of  the release of its 3Q financials on Tuesday. Analysts are upbeat about the airline’s performance, expecting a pre-tax profit of GBP154.5 million, a near three-fold increase over 3Q2009.

Most other LCC stocks fell slightly during trade, led by Virgin Blue (-2.2%). The Brisbane-based carrier fell in line with the wider ASX200, which lost ground yesterday as the Aussie dollar fell back below parity with the US dollar. 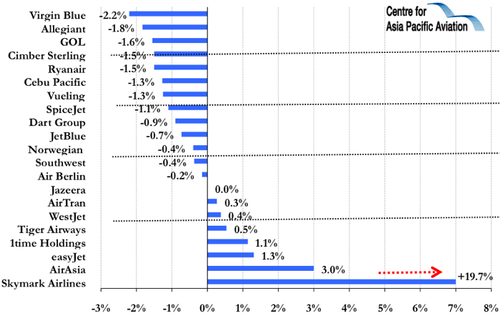