A350 update: Qatar Airways only operator, but Vietnam Airlines, Finnair and Cathay firm up plans

It has been more than three months since Qatar Airways took delivery on 22-Dec-2014 of the world's first A350 XWB. Since then Qatar has taken delivery of only a second aircraft and has used it to increase Doha-Frankfurt service from one to two daily flights, perhaps for operational or commercial reasons although far catchier was Qatar CEO Akbar Al Baker's explanation the double daily A350 would "rub salt in the wound" of Lufthansa.

A far greater commitment is in Singapore, where Qatar Airways will have three daily A350 flights to Singapore, a longer flight than Frankfurt. Singapore may be the first airport to see two A350 operators when Finnair commences A350 service there after other Asian points.

Vietnam Airlines will launch A350 service to Paris CDG while Cathay Pacific may make Auckland an early A350 destination. A350 configurations range from 280 to 305 seats. No airline has first class (yet) and business class seat counts range from 29 to 46, with business class comprising 10-15% of total seats.

Frankfurt and Singapore only announced A350 destinations for Qatar

Launch operator Qatar Airways received its second A350 in Mar-2015 and is using the aircraft for its second daily Doha-Frankfurt flight. The first flight has been operating with the A350 since the first aircraft was delivered at the end of 2014.

Qatar expects to end 2015 with five A350s in service. Qatar initially announced New York JFK as the first A350 destination. The switch from New York JFK to Frankfurt could have been commercial, operational (Frankfurt is closer than New York and initial production aircraft do not always have full specifications) or another reason.

There was speculation Qatar either moved the inaugural A350 route to Frankfurt or could not serve New York so instead selected Frankfurt as a rub to Lufthansa, based in Frankfurt and actively campaigning for restrictions on traffic rights for Gulf carriers. Whatever the ultimate reason, outspoken Qatar CEO Akbar Al Baker is running with the Lufthansa theme, saying A350 service to Frankfurt would "rub salt in the wound" of Lufthansa.

Qatar Airways expects a significant boost in Singapore-Europe and Singapore-US traffic after it adds a third daily flight to Singapore on 1-Jun-2015. In announcing the new flight on 2-Feb-2015 Qatar cited improved connections to the Americas and Europe.

The new schedule of three daily A350 turnaround flights represents a huge commitment for Qatar to the Singapore market. It particularly is noteworthy as Qatar will be deploying its third, fourth and fifth A350s to the Doha-Singapore route. The first two aircraft are being allocated to the Frankfurt-Doha route. Qatar is currently operating one daily Frankfurt-Doha A350 flight and will transition its second Frankfurt frequency to the A350 on 1-Mar-2015.

As a result Singapore will be Qatar’s second A350 destination. Qatar will also be the first carrier operating the A350 to Singapore, beating SIA by about seven or eight months. SIA has 70 A350-900s on order with the first aircraft expected to be delivered in early 2016.

Transitioning Singapore to an all-A350 operation should raise Qatar’s brand presence in Singapore as it makes a bigger push into the Singapore-Europe and Singapore-Americas market. As is the case with Emirates and Etihad, SIA will be most impacted as SIA accounts for about two-thirds of non-stop seat capacity between Singapore and Europe.

The second A350 operator will be Vietnam when it takes delivery of its first A350 in May-2015. Vietnam Airlines will be the second operator, and first in Asia, of both the A350 and 787 (Vietnam is taking the dash nine variant of the 787). Vietnam Airlines is using the new deliveries to over-haul its product and image. It is marketing itself around its twin widebody deliveries.

Vietnam Airlines will begin A350 long-haul flights (after domestic flights between Hanoi and Ho Chi Minh) to Paris CDG, first from Hanoi and then from Ho Chi Minh. Meanwhile its 787 will serve London.

Vietnam's only other European points are Frankfurt and Moscow. Frankfurt is currently served with 777-200s and Moscow with A330s. Its other long-haul points are Melbourne and Sydney in Australia.

Vietnam Airlines will acquire 10 A350s and lease a further four. Both the A350 and 787 (first version) will have three classes (business, premium economy and economy) but the business seats will be different in the A350 and 787 although still lie-flat with direct aisle access in a 1-2-1 configuration. Vietnam Airlines will have a second 787-9 configuration without premium economy.

Finnair receives first A350 in Aug-2015. European training flights to be followed by Asian services

Finnair will be third A350 operator and first in Europe. Its first A350 is due to be handed over 16-Aug-2015 and will take three additional aircraft during the year to end 2015 with four aircraft.

Finnair projected delivery dates for aircraft on order: as at 23-Mar-2015 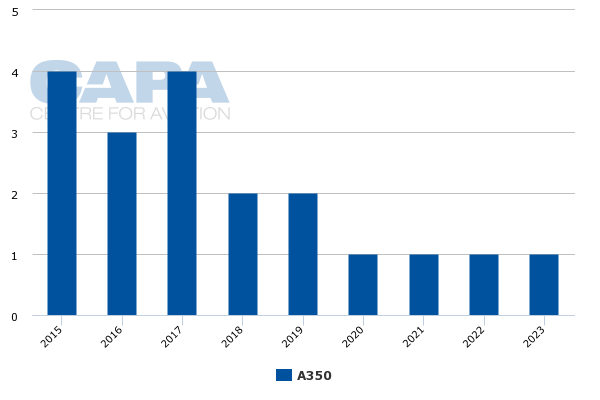 The A350s will be used to replace some older aircraft – notably A340s – but also to grow its network, which is anchored around Helsinki-Asia flights, with select North American long-haul flights. Finnair will initially fly the A350 around Europe for crew training. On 09-Apr-2015, Finnair will commence sales for A350 flights. Exact dates have not been confirmed yet, but Finnair said Shanghai Pudong will be the first long-haul destination in northern autumn 2015, followed by Beijing, Hong Kong, Bangkok and Singapore.

Finnair previously expected Shanghai, Bangkok and Beijing to be served in 2015 with Hong Kong and Singapore in 2016. Finnair's A350 roll-out mostly covers its Asian network with the exception of Seoul Incheon and services to Japan (as well as lower frequency services to cities including Chongqing).

As CAPA previously wrote: The selection of Beijing and Shanghai initially contrasts to some airlines planning 787 introductions. Those airlines are shunning China as initial 787 destinations, seeing the market's congestion and tendency for paperwork unfavourable to a new aircraft type that may have a reliability issue or need spare parts that are not common to the market.

Singapore Airlines (SIA) is also an early A350 operator and is expected to place its first A350 into service by early 2016. The first aircraft most likely will be delivered in late 2015 and placed into service in early 2016.

SIA has not yet announced a configuration for the A350. But it has said its first batch of A350s will be fitted with its new premium economy product, which is being introduced on its A380 fleet and some 777-300ERs in 2H2015.

SIA is expected to have three cabins on its A350s (business, premium economy and economy) and use the aircraft for a combination of long-haul and regional flights. SIA has 70 A350s on order, making it the second largest customer after Qatar. SIA and Qatar each account for approximately 10% of the total A350 order book.

Cathay also suggested Hong Kong-Auckland could be an early A350 route. This is logical since Auckland is currently served by A340-300s. Following Cathay's suspension of Moscow from Jun-2015, Auckland will be the only long-haul A340 route. A350-900s are also expected to replace 777-300ERs on smaller European routes as well as on some frequencies to major cities.

Cathay's A350 configuration details brings to four the number of airlines that have disclosed configurations for the A350-900. None have announced first class so far. So far the 787 has only three operators with first class: China Southern, Etihad and Xiamen.

SIA is also not expected to have a first class product on any of its A350s. SIA currently has first class on its A380 and 777-300ER fleets. The A350 is intended mainly as a replacement for A330s and older 777 variants which do not have first class. SIA uses the A330s regionally while the older 777s are used on regional routes and several thinner long-haul routes.

Qatar, Finnair and Cathay have the closest configurations with premium seats 13-15% of the total and economy 85-87%. Finnair's configuration is notable since it will be the second-highest after Vietnam Airlines, with Vietnam having only eight more seats despite Finnair having 17 more business class seats, which take up space.

Finnair's premium economy seats are the same as regular economy but with more legroom. This makes its 46 business/251 economy (regular and premium) configuration impressive (and more dense) compared to Qatar Airways, which has 10 fewer business class seats and four fewer economy class seats.

A350 configurations from announced operators: Mar-2015

The A350 programme is still very young with many customers still to receive A350s. Developments here include Lufthansa deciding to base the A350s at Munich, and not its main Frankfurt hub, with the carrier to take two A350-900s in 2016 and five more in 2017 for a total of seven by the end of 2017.

One of the largest A350 customers had been Emirates, until it cancelled in 2014 its order for 70 aircraft. Emirates is now considering an order to 50-70 A350s or 787s, indicating there are still many deliveries – and orders – to come. 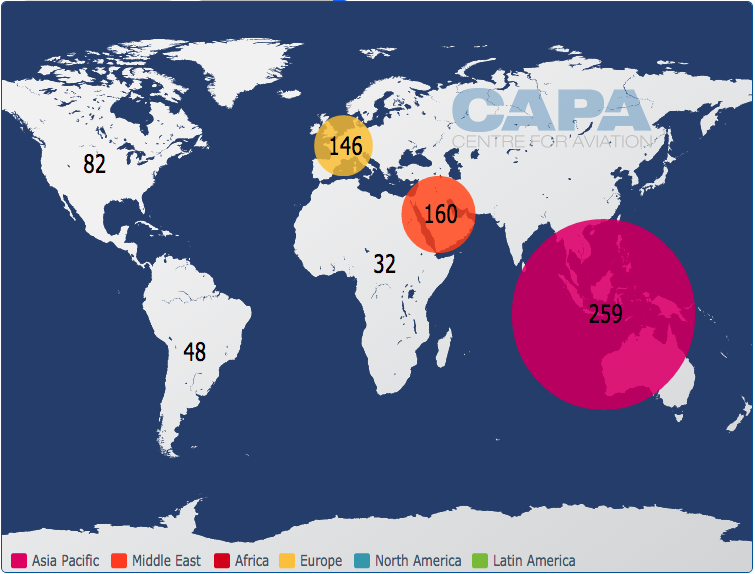