A trend back to hedging? - Friday fuel watch

The continued volatility in week to week pricing has ensured that many carriers are taking cautious approached to fuel hedging, but there are signs that renewed strong hedging positions may be taken as oil climbs back over USD80 per barrel, and now threatens to break through USD85 for the first time this year.

Hedging gains in 2009 helped Cathay Pacific Airways’ bottom line to the tune of USD355 million, and the carrier expects that if oil prices remain above USD80 per barrel the carrier will not suffer any net cash impact or mark-to-market loss this year. According to Chairman, Christopher Pratt, the result of hedging is expected to be “less volatile in future”, after many carriers reported hundreds of millions in losses in 2008 and 2009 on fuel hedging.

Continental Airlines has moved to increase its 2010 hedging levels, increasing its hedge of expected fuel needs from 11% in Jan-2010 to 23% in Mar-2010. 24% of 1Q2010 consumption is hedged, up from 20% in Jan-2010. US competitors, US Airways and American Airlines, hold stronger hedging positions, but have weakened their stances from 2008 and 2009 and have only hedged small positions for 2011, indicating continued uncertainty over the direction oil prices will take - but perhaps indicating their belief that the current level is near the top of the range in the current economic environment. 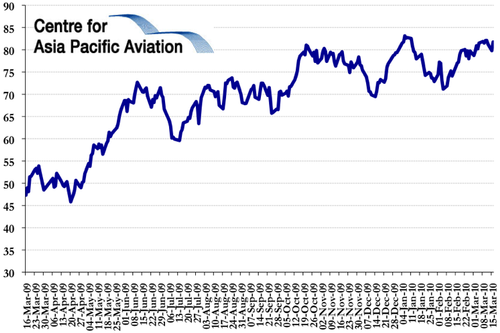 Jet fuel prices (cents per gallon) rose past USD210 cents on all markets, except Singapore, where prices fell 1.7% to USD204 cents. US Gulf Coast and New York Harbour prices were up 1.2% and 1.3%, respectively, with Los Angeles prices gained 1.9%. Amsterdam prices were up also up 1.9%. 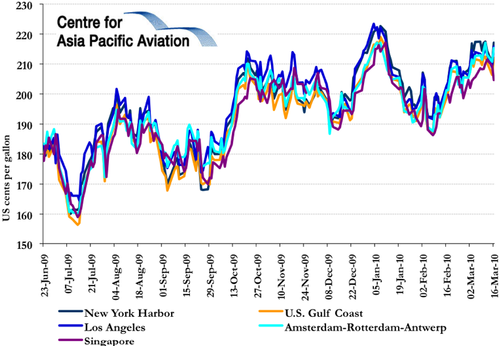