A slow start to the year for Airbus and Boeing, no recovery until 2011 or beyond

Neither large manufacturer expects much in the way of new orders this year, with a barren start of 2010 for Airbus and Boeing. The remarkable ordering boom between 2005 and 2008, when the manufacturers took a combined 8,200 orders (more than in the preceding ten years combined), is now in the distant past.

Orders for Boeing have been similarly slim, with just ten B737s sold to an “undisclosed customer” for the year to 16-Feb-2010.

The slow start to the year underscores the forecasts from both manufacturers that aircraft ordering will not begin to pick up until 2H2011, at the earliest, with 2012 looking more likely. While economies are beginning to show more signs of life, the aircraft ordering cycle is likely to lag the economic recovery cycle by a significant margin. Airbus is still however confident of a “V” shaped recovery.

Airbus expects to take 250-300 orders this year, after booking 310 gross orders in 2009 (271 net, after cancellations). Boeing has not announced an order forecast, but it booked 262 gross (144 net) orders last year. Production for both manufacturers is expected to be marginally lower, with both companies easing output levels on some models. Boeing expects to deliver 460-465 aircraft in 2010.

Early 2010 aircraft deliveries have continued much in the vein of 2009. Airbus delivered 29 commercial aircraft in Jan-2010, including two A380s, one to Emirates and one to Qantas. The manufacturer hopes to double A380 deliveries this year, to 20 aircraft. 23 A320 family narrowbody aircraft were delivered during the month, along with four A330s.

The only type not to appear on the delivery list is the A340, which has just two outstanding orders, for A340-600s to Iberia.

Boeing delivered 28 aircraft in Jan-2010, with single B777s going to Emirates, Qatar Airways, Cathay Pacific and GECAS. 23 B737s were delivered, including eight to Ryanair, and three to Xiamen Airlines. 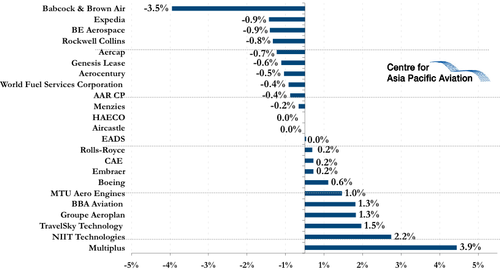