China Southern Airlines reported an 11% increase in passenger numbers in Sep-2009. Cargo volumes were up by a greater rate (+25%), due to double-digit domestic growth, while passenger load factors slipped 4.0 ppts to 72.6%.

On Friday, shares in Hainan Airlines, China Eastern, Air China and China Southern all gained, rising 4.7%, 2.4%, 0.4% and 0.4%, respectively. Shanghai Airlines’ shares remained unchanged, while in Hong Kong, Cathay Pacific’s shares were up 3.5%, for the fourth consecutive day, as the market continues to react positively to news that load factors are improving.

In other positive news for the Chinese airlines, China’s National Development and Reform Commission stated it would reduce the price of aviation fuel from 11-Oct-2009, although no details on the scale of the reductions were provided.

Also in North Asia, Korean Air’s shares gained 1.3% on Friday, as the carrier stated it expects to report an operating profit of USD163.3 million in 3Q2009. Also during the quarter, the carrier handled 3.7 million international passengers, a 8% year-on-year gain, with cargo volume also up in the quarter (+2% to 253,700 tonnes).

Qantas' shares were up 2.4% on Friday. CEO, Alan Joyce, stated he expects premium demand to eventually return, stating, “the business market will return, and when it does return you could easily see in a couple of years' time the bulk of our profitability being made through the Qantas brands again…I think [the Business market] does have a life, and after the end of every recession people have called the market as being dead and it's never been the case”.

In a positive development for the carriers, India’s Finance Ministry is reportedly in favour of a proposal to allow the import of aviation turbine fuel (ATF) under open general licence. If accepted, the recommendation would provide respite to airline companies, as it would reduce the price of ATF, which constitutes 40-45% of the airlines’ operating costs. 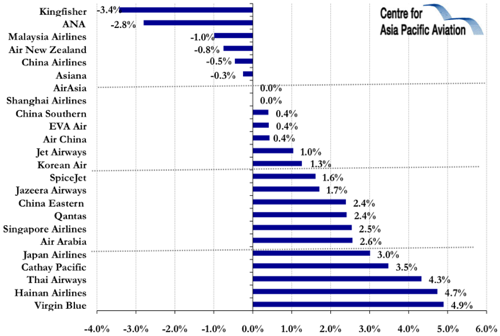