31 consecutive quarters in the black for Allegiant, but results hurt by late fall in summer traffic

Perennially profitable Allegiant Travel Company, the parent of Las Vegas-based LCC Allegiant Air, reported its second-best 3Q results since 2005 and its 31st consecutive profitable quarter yesterday. It was also the carrier’s eighth quarter in a row with double-digit operating and pre-tax margins.

Allegiant’s share price weakened slightly (-0.2% yesterday) as results failed to meet executives’ expectations on revenue projections, due to a fall in leisure travel in the summer and higher-than-expected fuel costs.

Revenues for the quarter, historically its weakest, increased 23% to USD163.6 million. The LCC posted a net profit of USD13.6 million (-4.5%) and EPS came in at USD0.67, beating analysts’ estimates by 3 cents a share. The airline’s operating margin fell 4.6 ppts to 11.9%. Analysts have maintained their bullish view of the stock, with five analysts maintaining a “buy” rating on the stock, one maintaining a “outperform”. Three have “hold ratings on Allegiant Travel Company.

Indian media tycoon Kalaninthi Maran increased his stake in India's SpiceJet (+2.9%) on Tuesday through an off-market transaction. Maran, through privately-owned Kal Airways, increased his stake by 4.78% or 19.37 million shares to 30.98% of the LCC. Kal Airways agreed to acquire a 37.7% stake in the airline from former shareholder Wilbur Ross and Royal Holdings Services at INR47.25 per share.

AirAsia fell 3.1% during trade despite ECMLibra Investment Research maintaining its “buy” rating on the LCC and 12-month price target of MYR3.50. ECMLibra sees considerable upside to the carrier’s current price, stating the proposed listing of Thai AirAsia and Indonesia AirAsia will enable the Malaysian parent to reduce its net gearing by transferring assets and liabilities to the associates. ECMLibra expects AirAsia to register revenue of MYR975 million and a core net profit of MYR231.5 million for 2H2010, based on its third quarter operating statistics.

The carrier stated it now expects EBIT of EUR60 million-70 million for the full year. Cost per ASK, excluding fuel, are expected to fall 4.3% for the year to EUR 4.0 cents.

For 2011, the carrier expects “continuous competitive intensity in our markets and fuel cost increases”. In response, Vueling has implemented its 2011 cost reduction programme.

Cebu Pacific, which listed on Tuesday, fell 1.5% but managed to hold above its offer price of PHP125 per share. The Philippine Stock Exchange index closed up 0.13%.

Shares in Virgin Blue, Australia’s second-largest carrier, ended the day 3.4% lower, despite CEO John Borghetti’s comments that he remains hopeful that the airline's tie-up with Delta Air Lines will clear regulatory hurdles, and that he is optimistic about the year ahead in the aviation sector.

"I’m not saying [next year will be] a stellar year, but I suppose what I’m saying is that we’ve seen the bottom of the market and it’s really a question now of how will it pick up. We’re starting to see some signs of recovery. The domestic market is holding a little bit better. [In] the international market, certainly the [strong Australian] dollar helps." 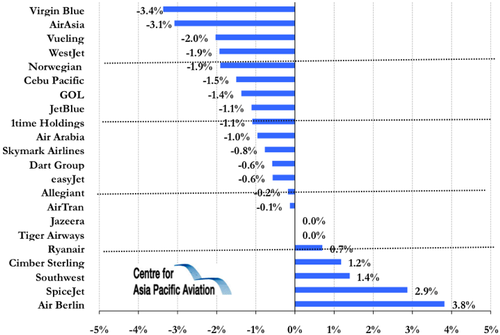