Worldwide traffic growth is “clearly on the rise” according to ACI World, which predicted that the world’s airports would handle “twice as many passengers” over the next 20 years.

“Emerging markets are buoyant, and we also now see that mature markets are returning to real growth compared to the pre-crisis levels. Although all markets are not progressing at the same rate, the global imperative is clear: airports must prepare to handle twice as many passengers in just twenty years,” ACI World Director General Angela Gittens noted at the ACI’s annual Airport Economics and Finance Conference in early Mar-2011.

ACI member airports report total global passenger traffic growth of 7.1% in Jan-2011, with strong support from the international market (+7.8%) as well as good performance in the domestic sector (+6.5%).

Europe, the largest international market, registered 8.3% growth in Jan-2011 while Asia Pacific, the second largest international, rose by 9%. Both had strong domestic travel as well, with Asia Pacific up by 11.2% and Europe by 6.6%. Latin America and Africa saw balanced growth in both markets, but with strongest expansion in domestic traffic (Africa +7.6%; Latin America +9.7%). The Middle East had total traffic growth of 8.6%. North America, the largest domestic market worldwide rose by 1.7%. 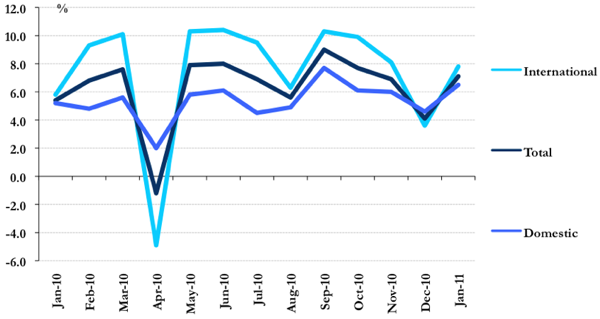 Decline in freight traffic replaced by a ‘firming trend’

The month-on-month averages indicate that the decline in freight traffic seen in 3Q2010 has been replaced by a “firming trend”, according to ACI. Asia Pacific’s international freight rose by 9% and domestic by 12% and Europe international increased by 11.4%. Latin America had the strongest increase in domestic traffic (+16%), whereas North America, the largest domestic market, remained flat (-0.8%). 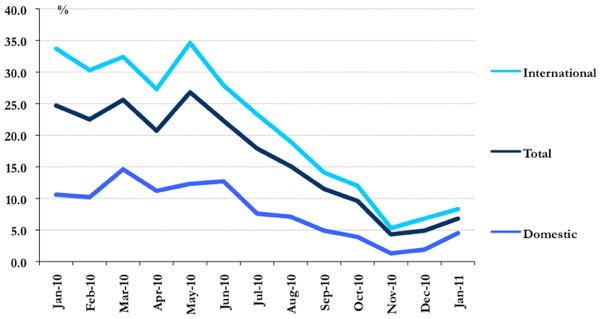 Need for airports to prepare for sustained traffic growth

ACI also stressed the needs for airports to prepare for sustained traffic growth, noting that “for capital-intensive infrastructure development, 20 years is a short time-frame to plan, finance and build new facilities to accommodate growth”.

Ms Gittens stated that while airports are taking action to “maximise efficient use of current facilities, working closely with our airline and air navigation service partners to implement new technologies and agreed standards that streamline passenger and cargo handling processes as well as enhance airside operations”.

However, she warned that this will “not be sufficient to absorb twice as many arriving and departing passengers”. She also noted that challenges involving in address the financing needs of airports.

“Against today’s backdrop of cautious investors and tight financial markets, airports must also meet short-term demands for profitability in an increasingly entrepreneurial environment. They must pay back their long-term debt while keeping a focus on future expansion needs. At the same time, airports must contend with short-term shifts in airline schedules and frequencies and compete fiercely with other airports for new routes and air services. That is why we also call on civil aviation authorities to ensure that their regulatory framework allows greater inherent flexibility in terms of economic policies and oversight,” Ms Gittens stated. 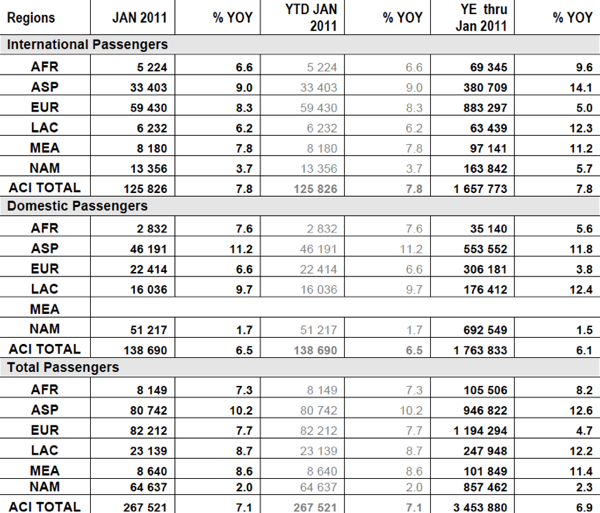 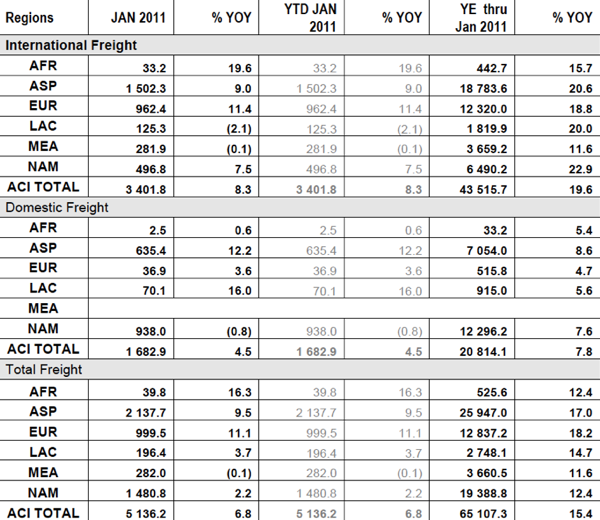