2010 – a return to growth for MRO providers? – Suppliers Share Wrap

2009 was a hard year for aviation MRO providers and parts suppliers, with airlines, original equipment manufacturers and other sector companies employing strict cash-conservation measures. Airlines cut back significantly on operations, cutting flying and grounding/storing aircraft, as well as reigning in discretionary spending, running down consumables and spares inventories and squeezing their suppliers for lower costs through renegotiated agreements.

The result was lower revenues and falling backlogs, although Lufthansa Technik observed recently that MRO has not been as heavily affected as in past crises, as airlines have not pulled in flight frequencies to the same extent as in previous downturns. Providers in some regions did suffer though, as many airlines chose to ground their older aircraft, which require comparatively more maintenance.

There are increasing positive signs for the MRO industry in 2010, as airline customers now look to rebuild their capacity and start looking at refitting/upgrading their aircraft interiors, as they adapt to some of the structural changes that have taken place over the past two years. However, the outlook for growth is tenuous, and much depends on the recovery in passenger traffic, which is heavily dependent on the global economy.

Deloitte Touche Tohmatsu (DTT) released its global aerospace & defense sector outlook for 2010 yesterday, forecasting orders for new commercial aircraft to rebound in 2010 to over 800 units, reversing the steep decline experienced in 2009. One of the "key trends" in 2010 is the likely acceleration of merger and acquisition activity in the industry. Consolidation in tier-one and tier-two suppliers is expected to rise, to gain economies of scale and increase industry asset utilisation.

DTT anticipates large original equipment manufacturers (OEMs) will continue to acquire smaller companies to fill capability gaps. European sector firms especially are likely to acquire US companies to “dollarize” their cost structure and to establish or strengthen their position with the largest aerospace and defense market in the world, the US Department of Defense.

DTT stated, "this year in the global sector, there is a sense of both caution and muted optimism. Although 2009 appears to be the bottom of the current economic cycle, the new decade is expected to provide new market opportunities", adding growth opportunities are expected especially in Asia for industry products and services, "with Asian firms also expected to increase their participation in the global supply chain".

SIA Engineering stated late last month, "in line with improving global economic conditions, airlines are progressively restoring flights to meet increasing demand. While this will have a positive impact on the Company’s businesses, we expect [airline] yields to remain under pressure. Measures continue to be put in place to improve productivity".

MAS Aerospace Engineering forecasts that revenue for the year would remain in line with 2009 levels, although this is still down by more than 10% on 2008 revenue.

Interior products and parts supplier, B/E Aerospace, stated earlier this month that 2010 would see higher consumables demand and a “marked pick up” in interest in retrofits and new acquisitions. However, the poor ordering through 2009 means revenue for the full year is still expected to decline by approximately 4.5%.

Goodrich added, "in our large commercial original equipment market channel, Boeing and Airbus delivered a record 979 new airplanes in 2009 and both manufacturers are striving to maintain stable production for their narrowbody airplanes through at least 2010".

The story emerging from the Singapore airshow, held over three days in early Feb-2010, was not one of aircraft ordering, but of MRO, engine and avionics deals. Of the USD10 billion in deals signed at the airshow the majority were for MRO and aerospace deals (as well as some strong military purchasing).

Jimmy Lau, Managing Director for the Singapore Airshow 2010, talking to Reuters, stated airlines are now “looking to put back in service what they cut back the past year and a half or so” and the “growth in MRO is going to be there."

Both Airbus and Boeing expect orders to lag deliveries in 2010, repeating the situation of 2009. Forecasts for ordering see no recovery until 2011/2010, but new aircraft deliveries are expected to remain close to 2009 levels. With traffic picking up, some airlines are returning older aircraft into service, providing another helping hand to the outlook for the MRO sector. Order backlogs for MRO companies are expected to begin to grow again from 2H2010. 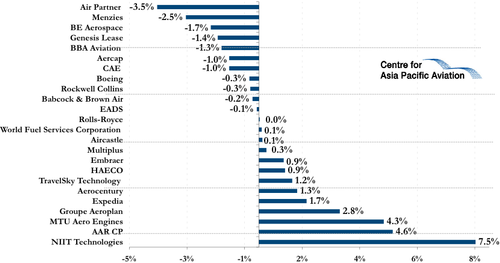