1time (-8.0%) shares were pushed lower by news during trading that the carrier has sold its Aeronexus Corporate subsidiary to two former Board Directors, Sven Peterson and Gavin Harrison, for USD217,851 (ZAR1.65 million).

1time stated the sale of the subsidiary will have no material effect on its financial position. As a result of the sale, investors became concerned the two former staff, who stepped down on 26-Jan-2010, are planning to launch their own carrier.

Mr Peterson and Mr Harrison meanwhile have strict limitations on what they can now do with their shares in the carrier. Each have 21.9 million shares in 1time, and are only allowed to sell the shares back into the market at low volumes.

The Centre for Asia Pacific Aviation (CAPA) has launch a unique new strategic business information service covering one of the world’s most exciting emerging aviation markets. Middle East-Africa Airline Daily is an efficient morning briefing on airline developments from both regions. Covering fleets, routes, financials, traffic, bilateral agreements, alliances, financing, ownership, along with analysis of all significant developments, it is your one-stop shop to aviation news from Africa and the Middle East – and best of all it’s free for a limited time. Sign-up today! 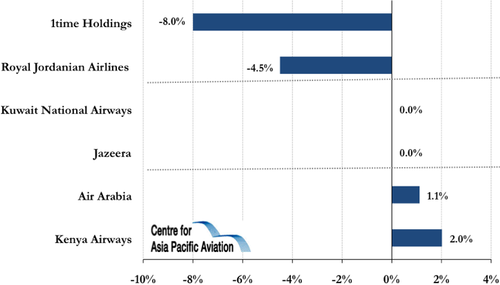