1time Holdings (+0.0%) reportedly referred its complaint of unfair competition against Kulula and Lanseria Airport regarding Kulula’s exclusive use of the airport to the Competition Tribunal of South Africa.

1Time is reportedly unable to serve Lanseria due to an existing agreement on regional and domestic operations between the airport and Kulula, which is valid for five years up to Mar-2011. 1Time reportedly submitted its complaint to the Competition Commission of South Africa 19 months ago, which the Commission found to be “anti-competitive”. However, the Commission reportedly did not forward the case to the Tribunal, as it stated the agreement was necessary to ensure Kulula would breakeven, now leaving 1Time to forward its complaint to the Tribunal itself.

Also in Africa, Kenya Airways (-4.3%) fell the most in two weeks, after stating its passenger numbers growth failed to keep pace with its increased capacity in the three months ended 31-Dec-2009. Comair (-6.3%) was also down, despite South Africa’s FTSE/JSE Africa All Share Index (+1.6%) making its biggest gain since 23-Nov-2009. Lonhro (+2.0%) meanwhile made gains.

In the Middle East, Royal Jordanian was flat. The carrier announced plans during trading to launch twice weekly non-stop Amman-Madinah Munawwarh service on 28-Mar-2010. CEO, Hussein Dabbas, stated that this route is an advantage to passengers who wish to visit Saudi Arabia for Hajj and Umrah.

Kuwait National Airways (-1.8%) continued to fall during trading, despite subsidiary, Wataniya Airways, telling Emirates Business 24/7 of plans to launch services to Abu Dhabi and increase frequency to Dubai by the end of 2010. Abu Dhabi would be the carrier’s second destination in the UAE. The carrier expects to take delivery of three A320s in 2010, increasing its current fleet of four A320s to seven. The aircraft are due in Mar-2010, May-2010 and Sep-2010.

Mr Cooper added Wataniya plans to add two more routes by the end of Mar-2010 and another two more in May-2010. Destinations were not disclosed. However, Mr Cooper stated Alexandria would “definitely” be a new route in 2010, which the carrier plans to launch services in Jun-2010. The carrier is also considering another aircraft type in 2010, which would allow Wataniya to serve destinations outside the Middle East.

Middle East-Africa Airline Daily is your one-stop shop to aviation news from Africa and the Middle East – and best of all it’s free for a limited time. Sign-up today! 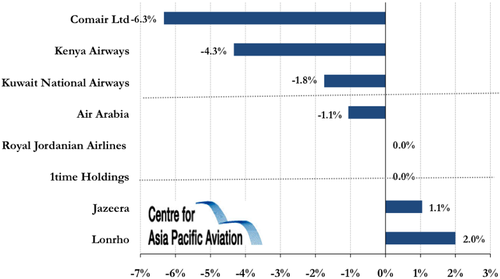