1time Holdings expecting headline earnings per shares of ZAR0.36-0.40 for FY2009; Comair down

Competitor, Comair (-1.8%) meanwhile fell, after South African Airways and partner airlines, SA Airlink and SA Express denied collusion charges to a South African Parliament’s Portfolio Committee on Public Enterprises investigation into price collusion between the group and other airlines ahead for the World Cup in Jun-2010, launched by the Competition Commission. Comair is also involved in the investigation, as is 1time and Mango, which have all also denied collusion.

The fall came despite a 0.8% climb in South Africa’s FTSE/JSE Africa All Share Index, after Moody’s rated the country’s A3 local and foreign currency ratings as “stable”, adding they are unlikely to be revised in the next 18-24 months. However, Moody’s warned the South African Government not to reduce its spending policies, stating it could lead to a downgrade.

Also in Africa, Lonrho was flat, while Kenya Airways (+7.5%) gained.

In the Middle East, all carriers’ shares were flat. 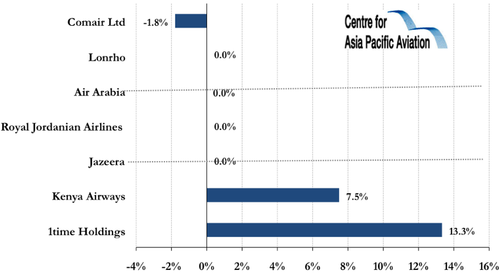