Kenya Airways’ shares closed 2.3% higher on Friday. Also Kenya’s All-Share Index surged the most since 03-Aug-2010. The gauge has increased 2.1% this month.

Shares in Kenya Airways Ltd climbed the most in almost two weeks, increasing 2.3% to KES44.75 after the carrier stated passenger numbers increased 9% to 849,566 in the three months ended Sep-2010.

In South Africa, 1Time rallied 7.7% while Comair shares lost 1.4%. Lonrho shares, listed in London, gained 6.0% on 29-Oct-2010. On the same day, the carrier announced that at the general meeting, the resolution was passed to authorise the grant of the conversion rights under the US70 million guaranteed convertible bonds issued by LAH Jersey Limited the Company's wholly owned direct subsidiary. Lonrho is also the parent company of Fly540.

In other South Africa news, the South African Civil Aviation Authority (CAA) stated it would launch an urgent investigation into how a 1time aircraft caught fire during a failed take-off from OR Tambo International Airport on 31-Oct-2010.

On the other end of the spectrum, Kuwait National Airways slipped 6.1% on Friday. Shares in Air Mauritius also declined 3.2% on Friday despite Mauritius’s SEMDEX Index rrising for a sixth consecutive day with a 5.7% rally in Oct-2010, a fifth consecutive month of gains. 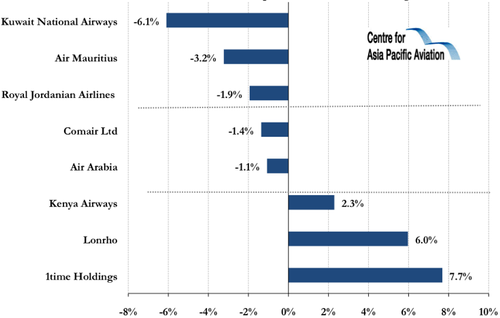