1time (-3.5%) finalised a USD9.2 million (ZAR65 million) deal to sell a 25% stake in the company to Mtha Aviation and SKMT Sunrise Investment Group. 1time will use the new capital to fund the group’s expansion and develop its facilities at Safair Technical, its maintenance division. The transaction will see 1time issuing a further 70 million shares at a price of approximately 93c a share.

The stake will be held through a newly incorporated company, Oakleaf Investment Holdings, with Mtha holding a 83% stake in Oakleaf and Sunrise 17%. Oakleaf will be entitled to appoint two non-executive directors and one executive to the board of 1time. CEO Glenn Orsmond said 1time was in advanced talks with Lanseria International Airport and expects to commence services from the airport in 1H2011, adding "We have submitted our schedules and we are in the process of ironing out the final details of the agreement. We will continue to apply for rights to new African routes as they come up."

Middle East shares were mostly on the rise on Thursday (25-Nov-2010) with Jazeera Airways (+3.4%) and Kuwait National Airways (+1.3%) up, while Air Arabia remained stable and Royal Jordanian (-0.6%) dropped slightly. 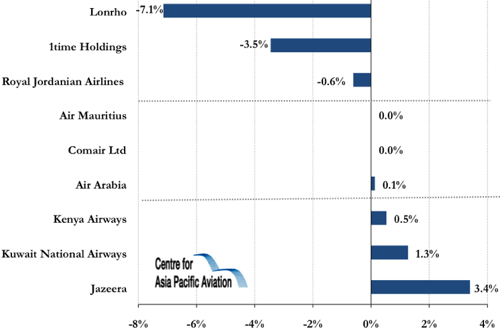