VietJet Air, an LCC that launched operations in Vietnam in Dec-2011, is expanding its schedule and in May-2012 will capture an estimated 9% of the domestic market. The growth honeymoon however will soon slow down and become competitive as Jetstar Pacific, now the LCC of Vietnam Airlines, plans to expand its fleet later this year. Jetstar Pacific currently only operates five Boeing 737-400s and two Airbus A320s but will expand to an all-A320 fleet of 15 within a "few" years, possibly placing it on par with the 15 aircraft VietJet plans to have by the end of 2014.

VietJet will use some of its A320s on international routes, possibly starting late this year, but aims to capture about 20% of the domestic Vietnamese market. VietJet currently has a fleet of three A320s although its current schedule – three roundtrips between Hanoi and Ho Chi Minh – could easily be operated with just one aircraft. VietJet's additional routes will fully or nearly fully utilise its current available capacity, allowing it to increase its market share from 3% to 9%. 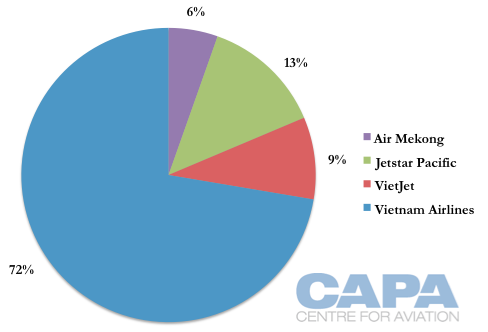 VietJet's current schedule comprises only three daily flights between Hanoi and Ho Chi Minh, the largest cities in the country's north and south respectively. The route is by the largest in the country, accounting for about 30% of total domestic capacity in Vietnam. From 27-Apr-2012 VietJet will add five daily return trips, bringing its frequency to eight daily services.

CAPA first reported last month VietJet's plans to more than double capacity between Hanoi and Ho Chi Minh. In announcing the increase to eight daily flights, VietJet cited it had an average load factor above 90% in its first two months of operating the route.

All VietJet services are operated by 180-seat A320s, bringing its weekly one-way seats on Hanoi-Ho Chi Minh to 10,080 – slightly exceeding Jetstar Pacific with approximately 10,000 seats. Vietnam Airlines now has 31,000 seats per week between Hanoi and Ho Chi Minh while Air Mekong, a private carrier operating Bombardier CRJ900s primarily on regional routes, has 1,350 one-way seats per week on the route.

As first repoted by CAPA last month, VietJet also has confirmed it will launch twice daily services in late April between Ho Chi Minh and Danang, the largest city in central Vietnam and a hub for tourism. Ho Chi Minh-Danang is the country's second-largest domestic route but a duopoly between Vietnam Airlines, with approximately 15,000 weekly one-way seats and Jetstar Pacific with 3,500 weekly seats. VietJet will enter with 2,500 weekly seats and hopes to stimulate demand with fares 20% to 30% lower than Vietnam Airlines, according to VietJet managing director Luu Duc Khanh. As CAPA wrote last month:

Vietnam Airlines will now pursue a dual-brand strategy with full-service Vietnam Airlines and LCC Jetstar Pacific. The two have not yet implemented co-ordinated schedules that could rationalise some capacity, although overall Vietnam remains a growing market.

VietJet also has announced it will launch on 19-May-2012 a daily flight on the country's 10th-largest route, Hanoi-Nha Trang. The route is the only one VietJet will not face competition from Jetstar Pacific.

Jetstar Pacific withdrew from the Hanoi-Nha Trang market in Sep-2011 after launching services only three months prior. Vietnam Airlines is currently the only carrier at Nha Trang and offers 3,800 weekly one-way seats on the Nha Tran-Hanoi route (it also links Nha Trang with Danang and Ho Chi Minh).

In Aug-2011 Hanoi-Nha Trang Cam Ranh was Jetstar Pacific's third largest route with 4,844 weekly seats, according to data from Innovata. In dropping the route, the carrier cited low demand outside of peak holiday periods. Cam Ranh Airport is a former military base located about 30km from the small coastal city and beach resorts of Nha Trang which opened to commercial flights in 2004.

VietJet's entrance to the Ho Chi Minh-Danang market and expansion on Hanoi-Ho Chi Minh is unsurprising. The carrier in Oct-2011, speaking after the AirAsia Group pulled out of a co-branding strategy, said it would launch without the AirAsia branding and would focus on Ho Chi Minh to Hanoi and Danang, as well as Hanoi-Danang, the country's third largest route. As CAPA wrote at the time:

VietJet, for the first few months, plans to focus entirely on Vietnam’s three biggest routes –Hanoi-Ho Chi Minh, Ho Chi Minh-Danang and Hanoi-Danang. These three main trunk routes now account for over half of total domestic capacity in Vietnam and over half of Jetstar Pacific’s total capacity. But from an LCC perspective these routes are currently under-served with LCC penetration rates of only about 20% – far lower than all other similarly sized domestic routes within ASEAN.

VietJet for now has substituted Hanoi-Danang with Hanoi-Nha Trang, a monopoly market. VietJet can be expected to continue to push into trunk routes as well as open international markets, which it hopes to achieve late this year following a second batch of A320 deliveries.