China Southern Airlines has become the first operator of the A380 in China and the seventh globally, with the newly delivered A380 the 58th A380 delivered to date by Airbus. China Southern chairman Si Xianmin said the airline would evaluate the aircraft's performance before deciding whether to acquire additional A380s beyond its small order for five.

The carrier has declared it still has not yet decided whether to deploy the aircraft to Europe or the US after initial test operations on domestic trunk routes between Beijing, Shanghai and Guangzhou that commenced on 17-Oct-2011, but says negotiations between the government and the European Union over the latter's emissions trading scheme will not be a factor.

There has been local speculation the Guangzhou-based carrier, Asia’s largest by passenger numbers, will use the A380 to open long-haul routes from a new long-haul hub in Beijing instead of Guangzhou, where the carrier is based and currently operates long-haul routes from. The move would bring China Southern into competition with Air China, and is reportedly considering targeting Air China's two most profitable routes: Beijing-New York and Beijing-Pairs CDG. China Southern serves Paris from Guangzhou, but New York would represent a new destination. China Southern only offers passenger services in North America to Los Angeles. Airbus, in its Sep-2011 A380 destination map, indicated Europe would be the first destination for the carrier's A380. The carrier is also seeking to launch service between Guangzhou and London and could operate A380 equipment on the sector.

Mr Si stated the "outcome of the negotiations between China and the EU on emissions will not be a key factor for us to consider where to fly our A380s." But he added: “I should say that the EU's decision on emissions would to a large extent affect an airline's operating costs and at the end of the day the interests of our passengers."

"Before we decide whether we are going to acquire more Airbus or Boeing planes we have to take the market situation into consideration and make a very careful analysis of the markets because China Southern has such a big aircraft fleet," Mr Si continued.

China as a country has threatened to acquire fewer aircraft from Airbus as a result of its dispute with the EU over the EU Emissions Trading Scheme (ETS) scheme. In Jun-2011, the Chinese Government reportedly blocked an order from Hainan Airlines' subsidiary Hong Kong Airlines for 10 A380s, a move believed to express the government's disapproval of Chinese carriers' inclusion in the EU ETS from 2012.

Chairman Si's comments on evaluating the A380's performance before deciding to potentially order more is consistent with Airbus' outlook on future A380 sales in China. Airbus has previously stated it expects to sell more A380 aircraft in China in the coming years, aided by strong air travel demand in the fast-growing market. While China Southern Airlines is the sole Chinese airline to have ordered the aircraft, Airbus CEO and president Tom Enders has stated it expects the nation’s other major carriers to warm to the aircraft soon.

"We're pretty confident in the coming years we'll sell more A380s in China. We certainly don't have to wait 10 years" for demand for A380s to pick up in China, Airbus China president Laurence Barron said earlier this year. "Chinese airlines historically have not been very enthusiastic about buying a product early in the programme. It will take some time for the Chinese airlines to really understand what a great aircraft it is," Mr Barron said of the A380.

Since entering scheduled service in Oct-2007, A380s flown by six different carriers have transported more than 13 million passengers, performing over 35,000 revenue flights while accumulating approximately 315,000 revenue flight hours. “Four years of operation show that airlines who fly the A380 increase capacity, gain market share and improve load factors – with an A380 now taking off or landing every 15 minutes,” Mr Enders said at the delivery ceremony of the China Southern Airlines’ A380. The other carriers with A380s currently in their fleets are Singapore Airlines, Emirates, Qantas, Air France, Lufthansa and Korean Air. These aircraft are meeting their performance specifications while serving 25 major cities worldwide, including flights that link the Middle East and Europe to Beijing and Shanghai in China.

Taking delivery of the new aircraft, China Southern chairman Si Xianmin stated: "We are proud to become the first A380 operator in China. The introduction of the A380 in our fleet is a very important step for the development of China Southern. The economics offered by the A380 will undoubtedly improve our competitiveness on international routes and is the perfect asset to make China Southern Airlines achieve its goal of becoming a leading global carrier”. 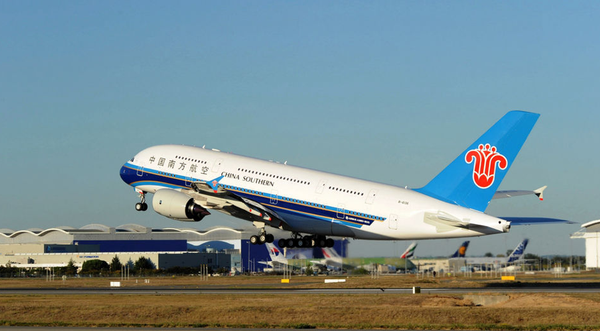 China Southern Airlines head of planning Yang Bo previously stated the carrier's A380s, and other aircraft, would help the airline more than double the percentage of capacity deployed on overseas routes to 35% by 2015. In an interview with Bloomberg he said the A380 will "put us in a completely different league" and help the carrier boost its brand image and raise its international profile. China Southern Airlines president Tan Wangeng had similar sentiments: "We will improve our services, boost our brand image and accelerate internationalisation with the A380.”

China Southern Airlines is seeking to add more widebody aircraft to its fleet as it boots its international network amid intensifying competition on domestic routes following the development of the high-speed rail network in China. Like its ‘Big Three’ peers, China Southern Airlines’ network remains heavily oriented to the domestic market. It has the lowest level of international traffic (RPKs) of its peer group, but the fastest growth rate in the past four months. China Southern is in the unenviable position of having 80% of its domestic route network, and nearly a quarter of its city pairs, competing with high-speed rail.

The carrier is scheduled to receive its second A380 in Dec-2011, a third in Feb-2012, its fourth in 2H2012 and its fifth and final A380 in 2013. While China Southern's order for five A380s is in line with some smaller operators like Malaysia Airlines and Thai Airways, the higher growth from China and large order book of wide-body aircraft from competitors could easily see China Southern order additional A380s. Airbus projects the A380 to have the range to operate to almost any destination from China, with the exception of South America.

A380 range from Guangzhou 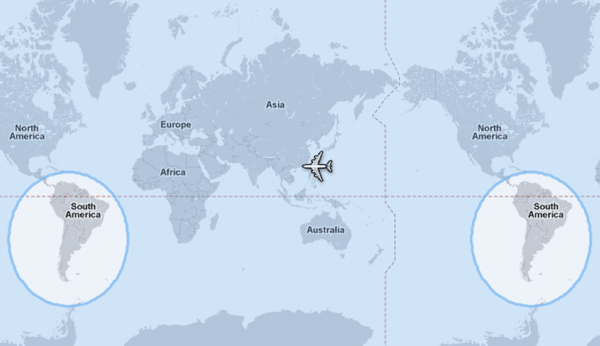 The area covered in blue will represent all possible destinations within its typical range.
Source: Airbus

Configured with 506 seats in three-class layout, with one of highest economy class seating densities 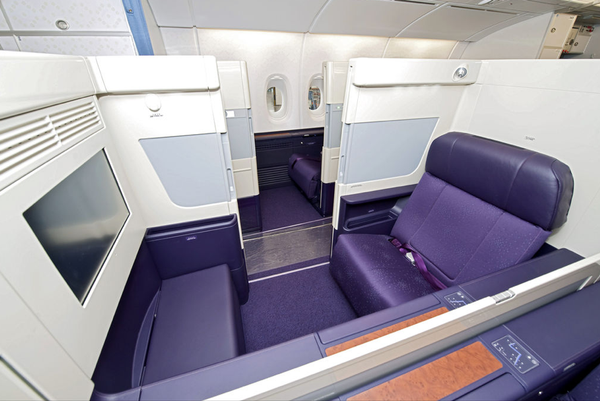 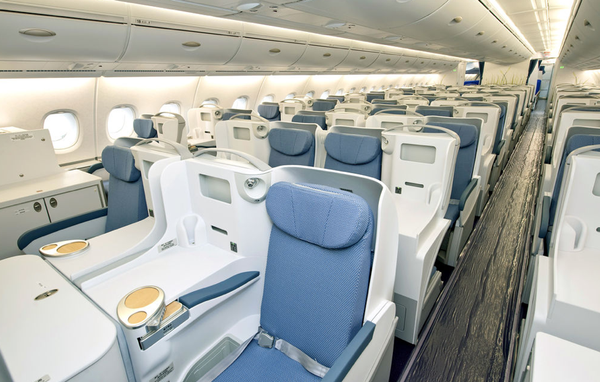 The carrier’s eight first-class suites on the A380 are located on the lower deck of the aircraft, in the front of the main cabin. These suites will have lie-flat massage seats. The 428 economy class seats are located in the lower deck as well. The upper deck of each of the aircraft will form the business class with 70 full-flat seats. This configuration means the carrier will configure the aircraft with the one of the highest amount of economy class seats among A380 operators.