The staggering growth from a base of virtually zero at the turn of the century has completely and forever changed the competitive landscape. The growth seems poised to continue as the region’s LCCs having committed to acquiring about another 1,200 aircraft over the next 10 years. Three new LCCs are also planning to launch scheduled services over the next couple of months.

But the rate of growth has started to slow down as the market has become more mature. After growth of about 30% in 2013 LCC capacity grew by only 13% in 2014. A similar low double digit growth figure is likely in 2015 as Southeast Asia’s LCC sector expands to about 600 aircraft.

But rapid growth over the medium to long-term is still expected. The recent slowdown is in part a reflection of the challenging market conditions, which have promoted some LCC groups to become more disciplined with capacity for the time being.

In attempt to unlock new areas of growth and provide an element of differentiation in an increasingly competitive industry LCCs in Southeast Asia have been evolving. Partnerships and transit traffic are becoming increasingly common. What could be some of the next strategic changes pursued by Southeast Asian’s LCCs? Will Asian LCCs further hybridise? Or could there also be a move by some to adopt the Ultra LCC model that has popped up in other regions? Will some of the region’s LCCs try to differentiate themselves and steer away from the hyper competition that has become common across major routes by opening new routes connecting secondary cities, potentially with new aircraft types?

This has been anything but a static market over the last several years. Undoubtedly there will be more change as Southeast Asia’s LCCs battle each other for bigger slices of the growing pie.

The CAPA Fleet & Finance Summit in Singapore on 2-3 March features a panel that will review many of these questions.

For more information and to register for the CAPA Airline Fleet and Finance Summit, please click here.

Panel discussion: The future of the LCC model in Southeast Asia: Which airline business models will emerge winners, as liberalisation occurs and how can Southeast Asia’s LCCs differentiate themselves with an ever changing industry?

Other confirmed speakers at the Summit include:

CAPA is also pleased to announce the support of our Cornerstone Partners, Transportation Partners and Stephenson Harwood.

"Transportation Partners (TP) is honoured to be a cornerstone sponsor for this year's CAPA Summit 2015. More and more lessors are coming to Singapore, and what better location than Sentosa to host the most airline-centric event in the conference calendar.

"TP is now one of the largest lessors operating under the Singapore Government's ALS scheme, with over 50 aircraft on lease to airlines in China, Brazil, Indonesia, Malaysia and Thailand. ASEAN is our home,” said John Duffy, COO, Transportation Partners.

"We are delighted to be a cornerstone sponsor for the CAPA Summit 2015. Singapore is now undoubtedly the focal point for aviation finance in Asia.

With one of the largest team of lawyers dedicated to aviation finance in Singapore, Stephenson Harwood advises banks, investors, lessors and airlines on market-leading and innovative transactions. The CAPA Summit provides a perfect platform for aviation finance professionals to meet, network and create new ties for the future,” said Saugata Mukherjee, Partner, Stephenson Harwood.

"Citi is proud to be associated with CAPA’s Airline Fleet and Finance Summit as a foundation partner. For the past three years, the event has served as a conduit for strengthening relationships between airlines, lessors, banks and other capital providers. CAPA’s ties with the key industry players combined with the timing and location of the conference have made this an important event in the aviation calendar,” said Anup Mysoor, MD, Head of Aviation Asia Pacific, Citigroup.

“BOC Aviation is pleased to be a Foundation Partner for CAPA’s Fleet & Finance Summit 2015. From our own establishment in Singapore in 1993, we have grown to one of the top five global aircraft leasing companies by owned portfolio. This is testament both to the support of our stakeholders, and to Singapore being an important global finance and aviation hub, backed by strong government policies. Singapore is located at the centre of the world’s fastest growing markets, contributing to an increasingly vibrant aircraft leasing and finance industry and we look forward to more opportunities, like the CAPA Summit, to strengthen our community,” said Robert Martin, CEO and MD, BOC Aviation.

With thanks to our event partners: 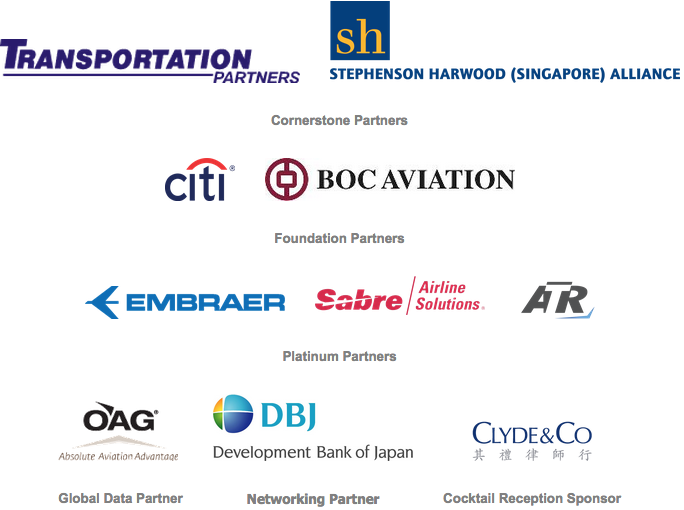