Flybe: FY2015 result goes down - and up - but shows progress with restructuring

Flybe reported a pre-tax result for FY2015 in line with expectations, confirming that its restructuring is starting to have a positive impact. Confusingly, the reported FY2015 result fell into loss after having recovered in FY2014, but this was blurred by a series of non-recurring/non-operating items. Flybe also reported what it calls an "illustrative" pre-tax result, by which measure its profit grew and this more closely reflects the progress made under CEO Saad Hammad.

Flybe also signed a contract flying agreement for SAS and sold its stake in its Finnish joint venture. Moreover, it made progress with a number of other legacy issues, including exiting from its Embraer E175 order and securing additional used Bombardier Q400 aircraft. A key outstanding issue is finding a solution to its surplus E195 aircraft. In FY2016, it must aim for an improved result without having to rearrange the numbers.

Flybe reported a fall in its pre-tax result from a profit of GBP8 million in FY2014 to a loss of GBP36 million in FY2015 (March year end). However, this loss included a number of items that are non-recurring and do not reflect the underlying progress of the business.

These were a provision associated with EU261 consumer protection law of GBP4 million, aircraft costs associated with seven surplus Embraer E195s amounting to GBP26 million, a write down of USD loans of GBP10.2 million and Flybe's share of losses in the discontinued Flybe Finland joint venture of GBP12 million. These FY2015 items compare with FY2014's GBP1.7 million in surplus aircraft costs, a GBP8.3 million increase in the value of USD loans, a profit of GBP0.1 million from Flybe Finland and a net GBP0.2 million of restructuring costs.

On the basis of this concept of an "illustrative" pre-tax result, Flybe has achieved two successive years of improvements from a loss of GBP34 million in FY2013. Without the adjustments, FY2015 was a return to loss (the fifth loss-making year in the past seven years) after a small profit in FY2014. Although most companies, and analysts, adjust their reported results to take account of non-operating or other exceptional items, the choice of what to include and what to exclude is a grey area.

For example, Flybe's treatment of the ownership costs of aircraft that it has chosen not to fly as not in the ordinary course of business is at least debatable. If it can find alternative operators, or sell them, they will not be part of the cost base for the scale of business that it now runs, but it has now incurred what it calls "surplus aircraft costs" for three successive financial years.

In addition, while foreign currency loan revaluation is not a cash cost or benefit, it is required by accounting standards and is the result of the funding choice made by the company.

Only when, and if, Flybe resolves its fleet question and starts to make sustainable levels of profit, and therefore no longer needs to adjust its results, can it really claim to have fully turned itself around.

Flybe closed FY2015 with a gross cash balance of GBP178 million, the same figure as at the end of FY2014. This was equivalent to 113 days of revenue, confirming the significant balance sheet improvement that was achieved in FY2014 through a GBP150 million issue of new equity capital and asset disposals (its end FY2013 cash balance of GBP23 million had been equivalent to only 14 days of revenues).

Flybe sold its stake in Flybe Finland, a joint venture with Finnair, at the end of FY2015, having reached agreement to sell it to Finnair on 11-Nov-2014. The results from this business have been treated as discontinued operations and so the discussion of traffic, revenue and costs that follows excludes Flybe Finland.

Flybe's core airline operation, Flybe UK, cut its seat capacity by 7.6% to 10.3 million seats in FY2015, but held passenger numbers virtually stable at 7.7 million. This meant that load factor jumped 5.7 ppts to 75.2%. Although this is well below industry average levels in the region of 80%, it is high by comparison with other regional airlines. Moreover, it represents a significant increase over the low-mid 60% load factor range that Flybe occupied for many years before starting to improve in FY2014.

Contract flying revenue fell by 28% due to the reduced scale of Flybe's contract with Brussels Airlines, its main customer in this business. A contract flying agreement for SAS will commence in Oct-2015 and Flybe has had discussions with 19 airlines across Europe with a view to further opportunities in this area. However, it says it has experienced a high level of inertia due to legacy arrangements and that government influence is evident. Its priority is to implement the SAS contract in order to establish reference data. Contact flying is likely to remain a slow burner for Flybe.

Other revenue fell by 33%, mainly due to a reduction in unprofitable charter operations. Other revenue also includes the activities of the MRO division Flybe Aviation Services (FAS), whose third party revenue grew by 12% to GBP23 million.

Flybe's operating costs, excluding surplus aircraft costs and the EU261 provision, fell by 9.7% year on year in FY2015 (also excluding net restructuring costs from FY2014), more than the fall in seats and revenue. Fuel costs fell by 12.1%, although Flybe's hedging programme limited the benefits of lower fuel prices. We calculate that the fuel bill would have been GBP5 million higher in FY2015 at the same fuel cost per seat that Flybe paid in FY2014.

Ex fuel costs fell by 9.1%, with labour costs down 16.0%, airport and en route charges down 11.0% and maintenance costs down 11.2%. Marketing and distribution costs increased by 17.6% as Flybe invested in support of route changes and the achievement of improved load factor.

Flybe's cost reduction programme achieved savings of GBP27 million in FY2015, in addition to GBP47 million in FY2014, giving a total of GBP74 million, which is GBP3 million more than originally targeted. 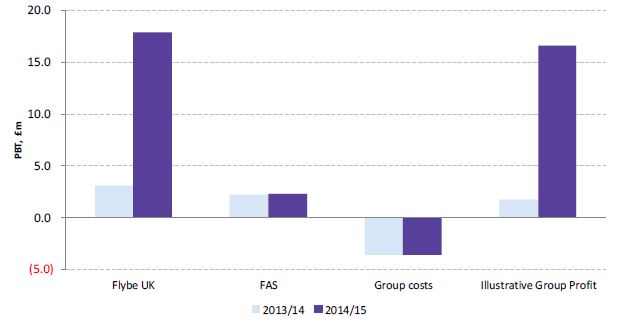 The cut in cost per seat drove the improvement in underlying operating profit at Flybe UK, and hence the group. 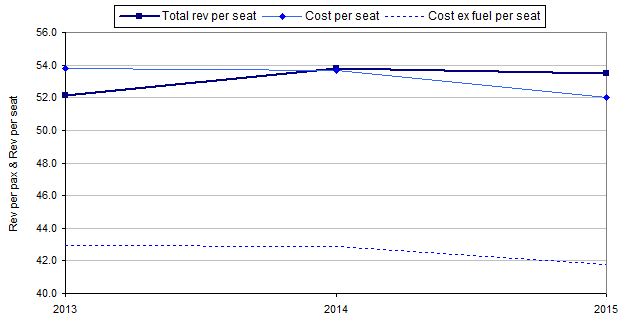 Flybe UK's total fleet consisted of 66 aircraft at 31-Mar-2015, down from 70 a year earlier after the return to lessors of four E195 regional jets. Since the year end, it has returned one more E195 and has allocated two to its new Cardiff base.

This still leaves it with a further seven E195 aircraft that are essentially surplus and for which it is pursuing "multiple options" to find a solution. For now, three of the seven are being deployed in the summer 2015 schedule, three are grounded and one is a spare. Flybe does not plan to operate E195s beyond this summer. It says that the annual cost of surplus aircraft is now GBP20 million, down from GBP26 million in FY2015.

Flybe successfully withdrew from a firm order for 24 E175 aircraft during the course of the year. Its current 11 E175 aircraft are expected to remain in the fleet until at least Mar-2018.

Flybe also secured 24 Bombardier Q400s on sub-lease from Republic Airways, with delivery starting from May 2015, and signed an agreement with Embraer to enhance the reliability of its fleet of 45 Q400 turboprops. The 24 aircraft from Republic will join at the rate of eight per year until FY2018, by when the fleet is expected to total 70 aircraft (net of the exit of some of the existing Q400 aircraft). 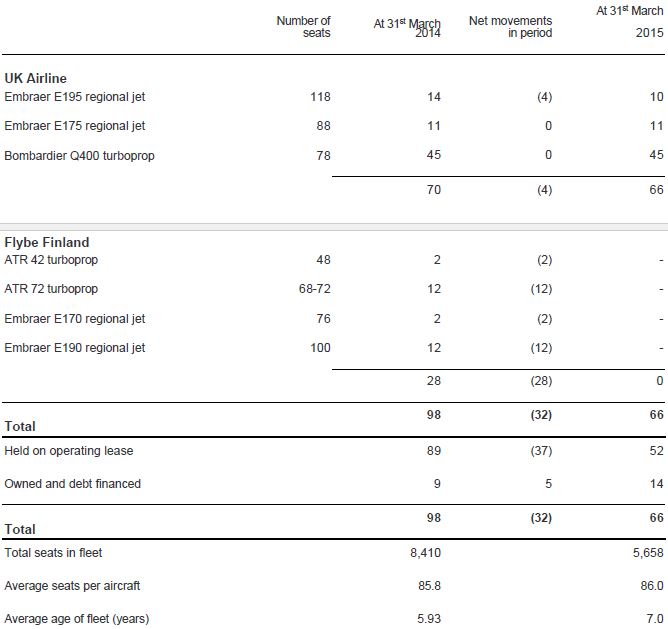 Although seat capacity was down for the financial year, Flybe increased it by almost 15% in 4QFY2015, while passenger revenue grew by around 7% in 4Q. This signalled a return to growth for the airline and this has continued into 1QFY2016 (the quarter ending Jun-2015), when seat capacity will be up by 13%.

Flybe says that 1QFY2016 yields are stable, but the proportion of seats sold as at 31-May-2015 was down 2ppts year on year at 65%. CEO Saad Hammad attributed this dip in load factor to the earlier Easter, which meant that some holiday traffic moved into Mar-2015, but also conceded that the rapid capacity increase may also be partly to blame. "When you are injecting capacity of the order of 13%-15%, you have to work hard to fill the seats," he told analysts at a meeting to discuss the FY2015 results. The fall in load factor will lead to a 0.7% decrease in revenue per seat in 1QFY2016, according to Flybe's guidance.

Flybe has not provided FY2016 guidance, but Mr Hammad said that seat growth would continue at a similar rate to that seen since 4QFY2015. New bases at Aberdeen and Bournemouth from Mar-2015 and the continuation of a number of new routes launched in 2HFY2015 (winter 2014/2015), including seven at London City Airport, are contributing to this growth.

Three routes at London City presented a bigger than expected challenge: British Airways launched head to head competition on London City-Dublin, demand was slow on Exeter and much weaker than expected on Inverness. Flybe terminated Dublin and Inverness this summer and cut its Exeter frequency from three to two dailies, while increasing frequencies on better performing routes to Aberdeen, Belfast and Edinburgh.

Nevertheless, and as hinted by Mr Hammad, Flybe's renewed strong capacity expansion, together with lower fuel prices, seems likely to place continued downward pressure on Flybe's unit revenue. As ever, further unit cost reduction will be the key to further profit improvement.

See related report: Flybe: a niche occupied by few other airlines, but still with a unit cost disadvantage