European airline industry steadies itself for the peak summer quarter

As 3Q2022 gets under way, Europe is lagging the leading regions in the capacity recovery, but is nevertheless within touching distance of them. Its airlines are also closing in on a return to positive EBIT margins for 2022, according to IATA's latest forecasts.

The trajectory of European aviation's recovery in 3Q2022, the peak summer quarter and historically key to annual profitability, will be watched closely.

In the week commencing 4-Jul-2022, total European seat capacity is scheduled to be 32.0 million, according to OAG schedules and CAPA seat configurations.

This week's total seat capacity for Europe is split between 7.6 million domestic seats, versus 8.1 million in the equivalent week of 2019; and 24.4 million international seats, versus 28.7 million.

Europe's 3Q2022 is projected at 89%, but further trimming is likely

This is further evidence that European airline schedules are now much more stable than at previous times since the COVID-19 pandemic began.

Nevertheless, current projections for 3Q2022 are a little higher than the fairly steady level of around 86% to 87% in the past seven weeks. Further schedule trimming seems likely as a result of staffing and recruitment challenges.

As previously suggested by CAPA, the final outcome for 3Q2022 may be slightly higher than 2Q's 84.3%, but not by very much.

Europe remains in fifth place in the ranking of regions measured by seats as a percentage of 2019 levels this week.

North America, Asia Pacific and Europe have taken upward steps in the trend this week, whereas Latin America and Middle East have taken downward steps and Africa is broadly flat on last week. 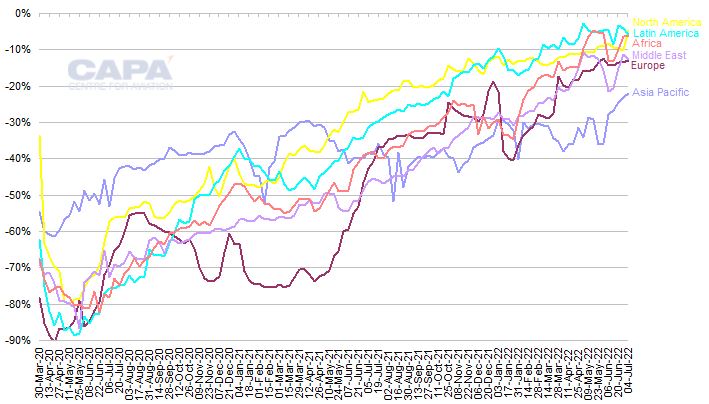 IATA forecasts that only North America's airlines will report a positive EBIT margin in 2022...

The different speeds with which each world region is recovering to its pre-pandemic (i.e. 2019) capacity levels have consequences for airline profitability in each region.

In its Jun-2022 update of its industry financial performance outlook, IATA forecasts that all regions will report much better airline EBIT margins (earnings before interest and tax as a percentage of revenue) in 2022 compared with 2021, but only North America will achieve a positive result.

Asia Pacific's lagging capacity recovery, the result of continuing tight travel restrictions (especially in China) and uneven vaccination rates, is likely to mean a slower recovery of profitability for the region's airlines.

IATA forecasts an EBIT margin of -5.9% for Asia Pacific in 2022 – this is the lowest margin forecast of any region.

By contrast, IATA forecasts that North America's airlines will achieve a positive EBIT margin of +1.9% – the only region expected to return to a positive result in 2022.

IATA's EBIT margin forecasts for the other regions are all in a tight range: -3.0% for Middle East, -2.8% for Latin America and Africa, and -2.6% for Europe.

The EBIT margin forecast for Europe is the second best, behind only North America. 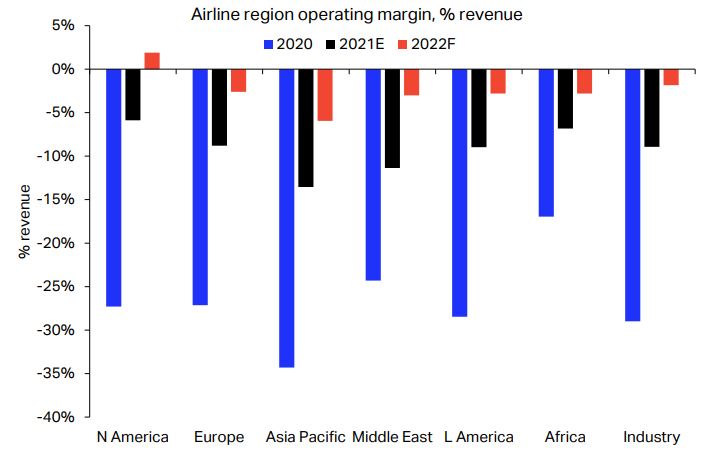 The pace of capacity recovery is clearly important but it is not the only driver of profitability, and there is not a perfect correlation.

The pace of revenue recovery in each region is driven by factors such as the mix of domestic versus international traffic, the level of travel restrictions still in place in other regions that provide a significant share of traffic, and yield development.

Other factors include industry structure and the intensity of competition and cost items, such as labour and fuel (including hedging levels).

Europe's relatively strong EBIT margin forecast in 2022 owes much to the northern summer coming after the removal of travel restrictions and improving yields.

3Q2022 is crucial to European airlines

In 2019, before the pandemic, 3Q accounted for 65% of the annual EBIT of the big five European airline groups (Lufthansa Group, Air France-KLM, IAG, Ryanair and easyJet).

The performance of the 2022 peak summer quarter will be crucial in determining whether Europe can meet, or beat, expectations.